This is a guest post by KC TAM on Using Various Tools for Smart Contract Development: Remix, Web3 on TestRPC.

This setup is very close to the previous one. The difference is to deploy the contract on a private Ethereum blockchain running on localhost instead of using TestRPC.

The node console portion is almost identical, but we need some tasks on private blockchain before things are running as we wish. They are the blockchain initialization and running the blockchain, account creation and mining. All these tasks are done by TestRPC in the previous session.

There are several implementations of Ethereum client. The most popular one is Go client (called geth). Installation of geth can be found here. Pick one to match your operating system.

This is the file used to initialize the private ethereum blockchain. I just show the one I am using.

You should have this already. Please refer to the Preparation session in the previous setup. Node and Web3 Module

Here I just list the steps good enough for this demo, with some brief explanation. For more detail, you can find on this wiki.

Open up the working directory. For sake of simplicity, we use the directory in the previous session, in which the node modules have already been installed. Make sure the genesis.json file is kept here. Create a directory here called “chaindata”. This directory will keep all the blockchain information and user accounts. 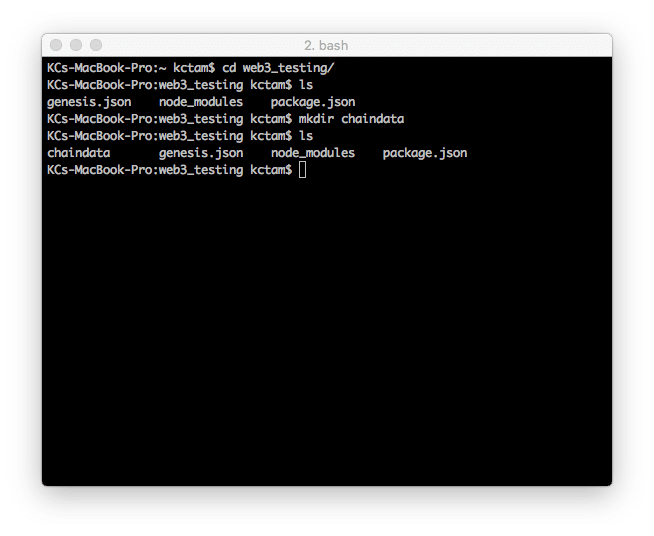 From now on we will split our screen into three, for different purposes. 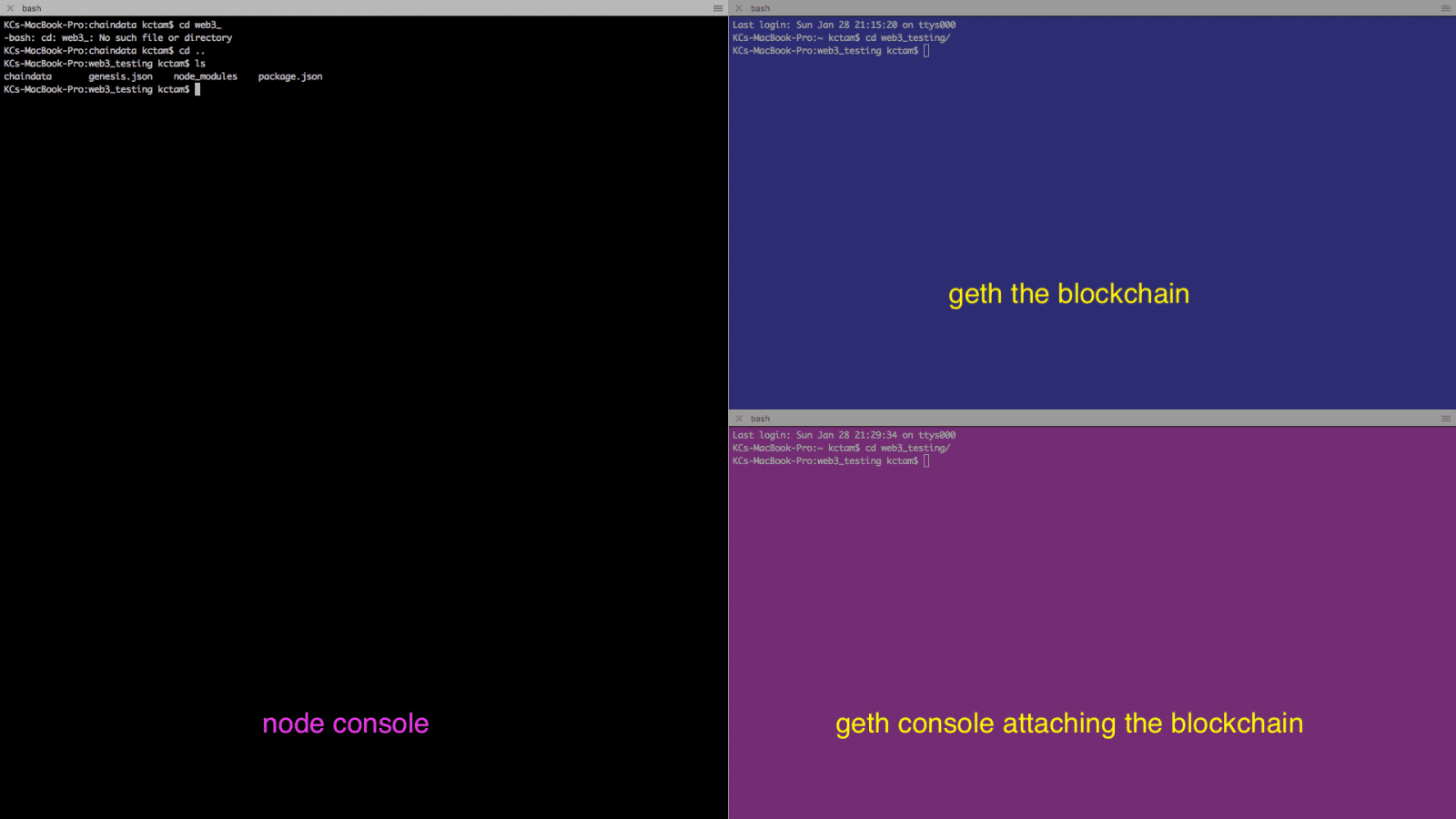 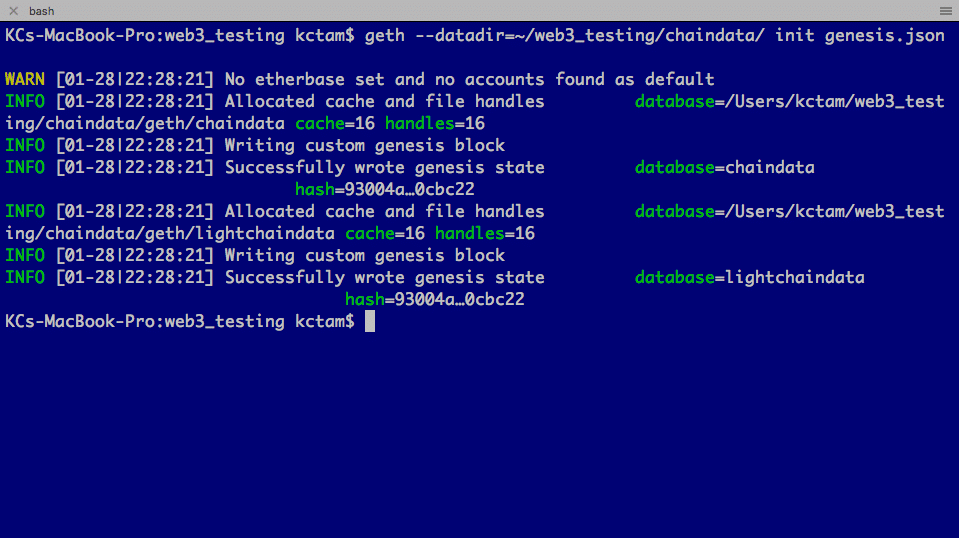 After initialization, in the chaindata directory two directories are created:

We can start the blockchain now. 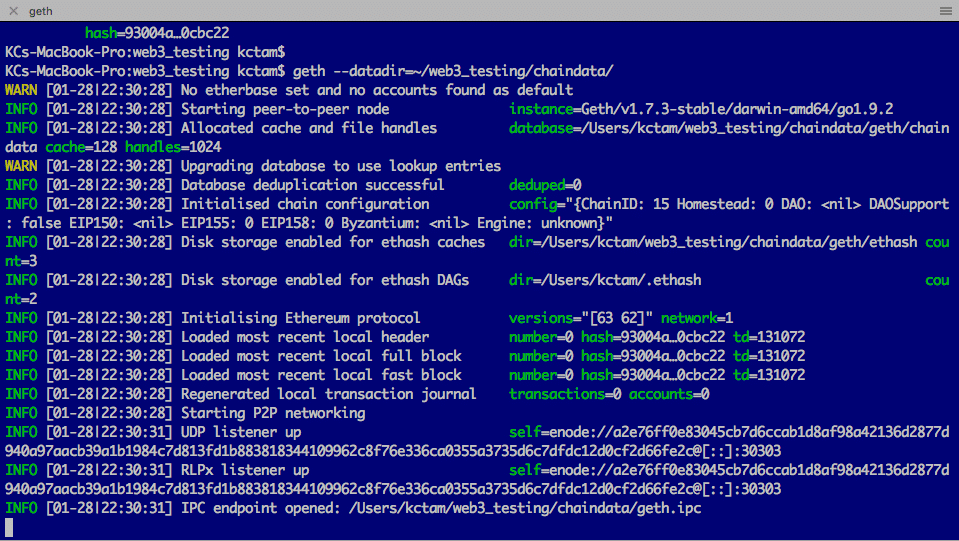 The geth console is on the bottom right terminal.

4. Add Some Accounts for Demo

When this private Ethereum blockchain is initialized, there are no accounts. For this demo, we are going to create four.

The first one is our base one, responsible for contract deployment and function execution. In addition, this account is responsible for mining, as, in private ethereum blockchain, we need someone to mine the block.

And if you check the directory in chaindata/keystore, you will see all these four accounts. 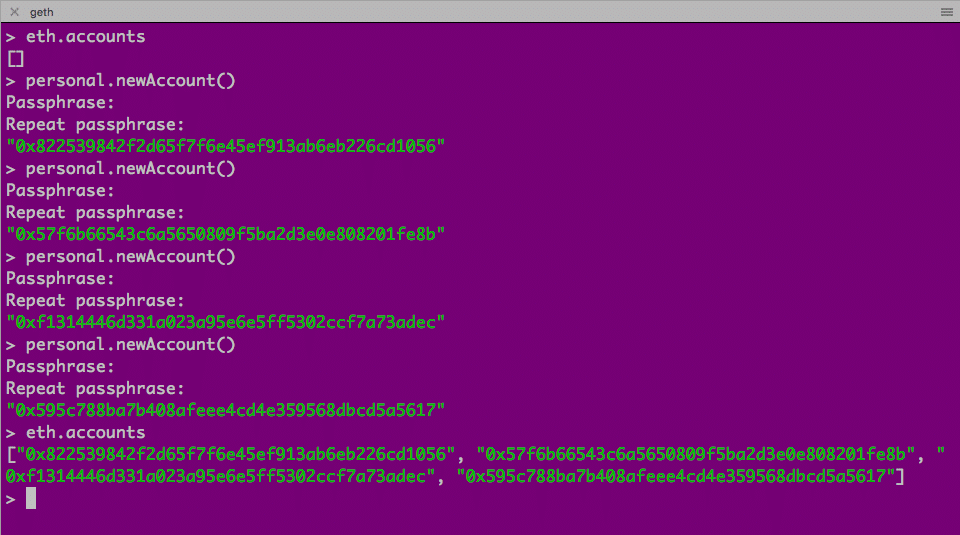 Here are the accounts. We will refer them later.

We can now check the account balance of these four addresses. Not a surprise, no ethers are in these accounts as they are newly created.

We are ready to see how mining is done. Private ethereum blockchain requires mining to build the block. As we have set a very low difficulty in genesis.json, it does not take too much time for a block being mined. After a block is added to the blockchain, 5 ethers are rewarded to accounts[0] (which is also called etherbase or coinbase account).

The first block may take a while. By examining the balance of accounts[0] and what appears on the blockchain window (top right terminal), you will know the mining is working well. 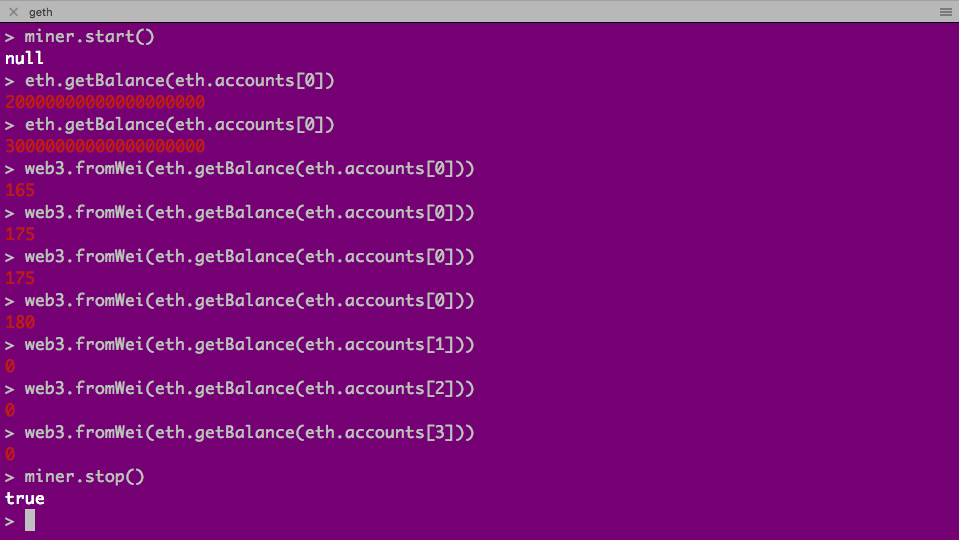 Notice all ethers go to eth.accounts[0], and we can use web3.fromWei to convert the balance from wei to ethers. And we can stop and start mining at any time. We stop it first and can start it later when we deploy contract and execute function. (In real life, some miners will do the job, and you don’t need mining by yourself unless you wish to earn some ethers through mining.)

The procedure is almost identical to what we did in the previous session. However, there is some additional work on the geth console, and we will highlight this.

On the node console, the terminal on the left-hand side, we first access node console and define the web3 object for accessing the private chain.

2. Turn on RPC on Geth Console

When we start the private blockchain, by default the RPC (accessing through http://localhost:8545) is off. We need to turn it on from the geth console.

And we can see on the blockchain terminal this message:

That means web3 from node can access the blockchain through RPC. This is not required for TestRPC as it is opened already. We can also turn RPC on when we start the blockchain (with option –rpc).

Verify the addresses that we have created before.

We see the exact addresses we have created on geth console.

We re-use the same checkAllBalances(), which is taken from here.

Simply copy-n-paste this function into node console. Now we can call the function checkAllBalances() at any time, and it will show up the balance of all accounts in ether. 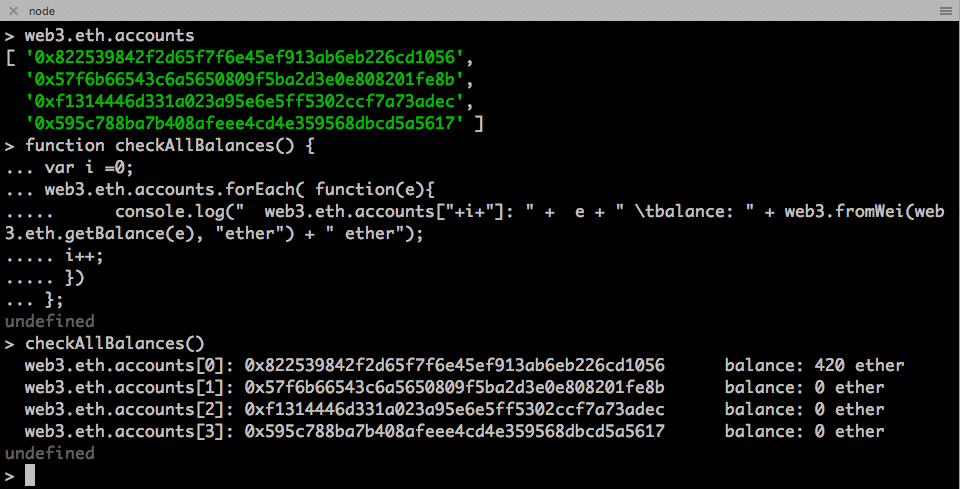 The balance is correct. The ethers in accounts[0] is due to mining. We will not refer to this, as during mining, this amount keeps increasing. We will check the balance of the other three accounts, which currently is zero.

Create a class for revenuesharingContract based on the ABI.

Up to this moment, we have not deployed anything on the private blockchain yet. Therefore no mining is needed. Gas is required for contract deployment, and therefore we need to unlock the eth.accounts[0] as we use accounts[0] to deploy this contract. It is done on geth console.

In case you are prompted to unlock the account due to timeout, you need to do this again.

Now we can deploy the contract with bytecode and necessary information.

Different from the previous session, we see the transaction is already shown in the blockchain terminal but not mined yet. No message from node console is observed yet.

Now we need to turn on mining on geth console.

As we turn on mining, we very soon see some blocks are mined, and on the node console, the message also comes out, showing that the contract is successfully deployed.

Similar to the previous session, the deployed contract is accessed through the object revenuesharing.

Examining public variables does not require gas, and therefore we do not need to unlock accounts and mining to perform this.

As executing function requires transaction cost and mining, we can start both from the geth console first.

The command we execute the function is the same. As in the previous session, we check the balance before and after the command.

We have got our desired result. The 30 ethers from accounts[0] is now distributed to accounts[1] to accounts[3]. We cannot verify the accounts[0] as new ethers are coming in due to mining.

We have again used web3 through node console to deploy and interact with the contract. This time we do it on a private Ethernet blockchain. The overall process is almost the same on node console side, but we have to take care of account creations, unlocking account, mining, etc in order to complete the whole process. This is not required in TestRPC as TestRPC performs all of these tasks.

Next time we will work on MIST, a user interface and again interacting on a private ethereum blockchain.

K
KC Tam
KC began his blockchain journey just a few months ago. His interest is to dig out more detail "how things work", and share with others what he has learnt.

357
newest oldest most voted
Have a question? Ask our Community

357
2018-04-03 18:01:03
Have questions? We have built an incredible community of blockchain enthusiasts from every corner of the industry. If you have questions, we have answers! Ask community

Ethereum 2.0 - What is it and when is it going live?
0
Hungry for knowledge?