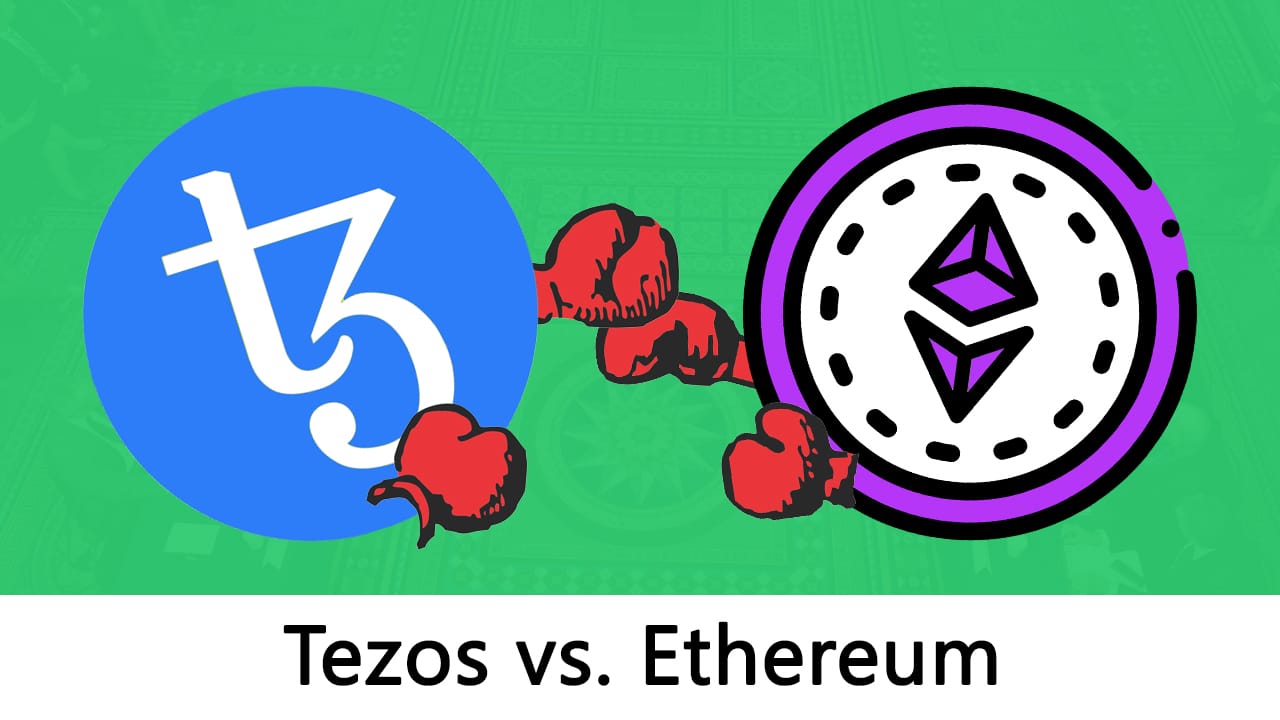 Ethereum and Tezos are two exciting projects that are worth looking into. Both of them are smart contract platforms and are aiming to enrich the dApp ecosystem by bringing in as many developers as possible to create high-quality dApps. So, in Tezos VS Ethererum we take a more in-depth look into both these platforms, in particular, their differences. 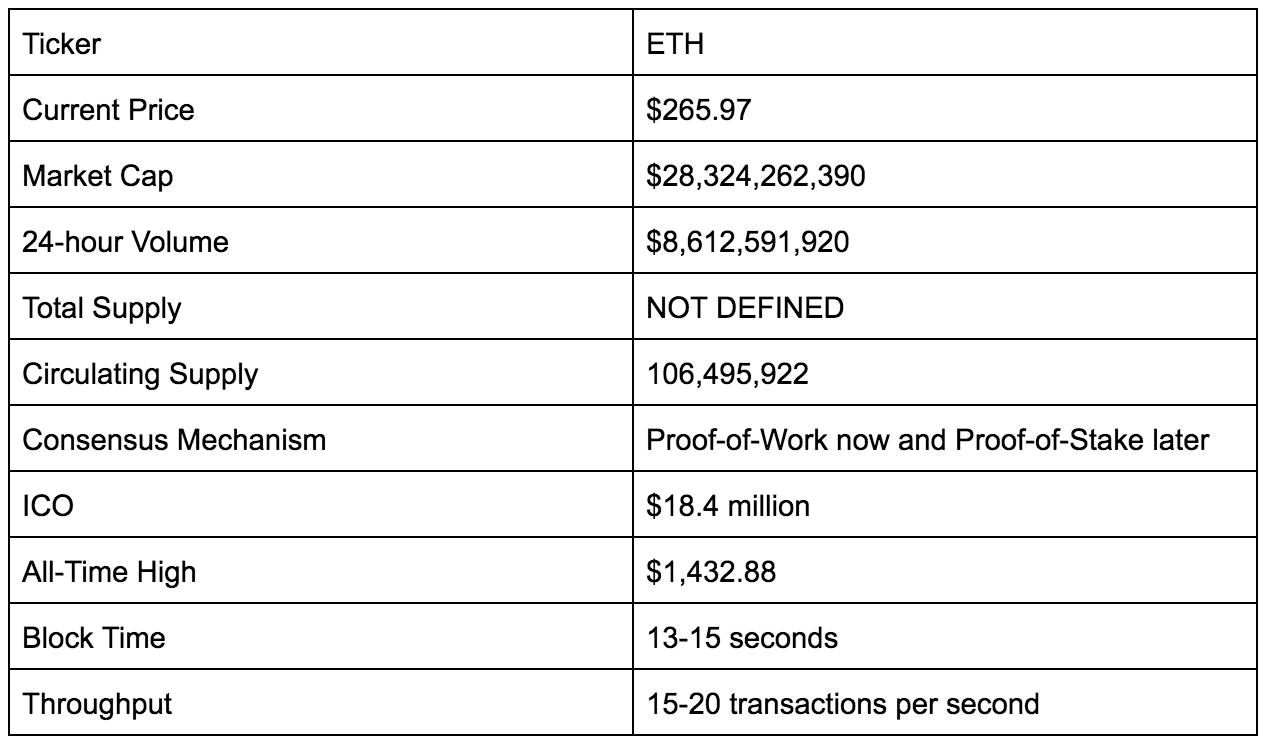 If you want a simple way to easily buy Ether by just using your credit card then click here.

Tezos at a Glance 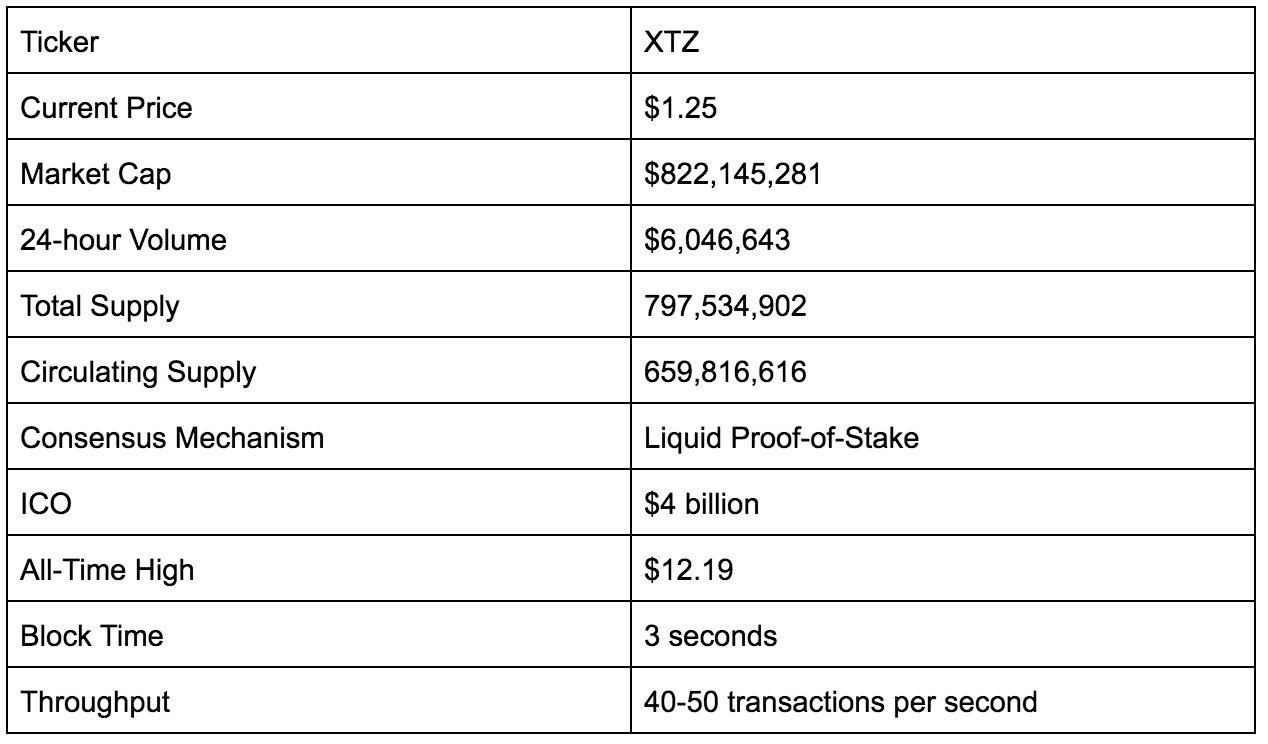 Tezos VS Ethereum : A Comparison

We will be focussing on the following points of difference:

According to Ethereum guidelines, the following needs to be kept in mind when it comes to EIPs:

EIPs can also originate from Ethereum Request for Comments (ERCs). In that case, the same procedure is followed as well.

ERCs are suggestions for improvement proposals which are submitted for peer review through Ethereum. The ERC-20 token standard came about as a result of an ERC. Once an ERC shows enough promise to improve the Ethereum ecosystem, they are discussed further within the community and later changed into EIPs.

In this stage, the developers working on Ethereum will hold exhaustive discussions and meetings on whether the EIP in question is sound enough for real-world implementation. These developers are deeply involved in Ethereum’s development. GitHub has an entire room dedicated to Ethereum governance and development on GitHub, where they indulge in real-time discussion. If the developers feel that the code upgrade will have a positive impact on the ecosystem, then and only then is the code implemented.

More of then than not, the discussion phase is often a death knell for most EIPs. The developers are reluctant to implement any change that may be a little too extreme to avoid a debacle like the Ethereum Classic hard fork.

There are both disadvantages and advantages to this process. The biggest obstacle, of course, is that this process takes a long time. The main advantage is that each EIP is so thoroughly researched, that more often than not, the EIP that gets passed brings in a positive change to the ecosystem.

The following flowchart taken from Unblock should give you an idea of how the entire process flow works. 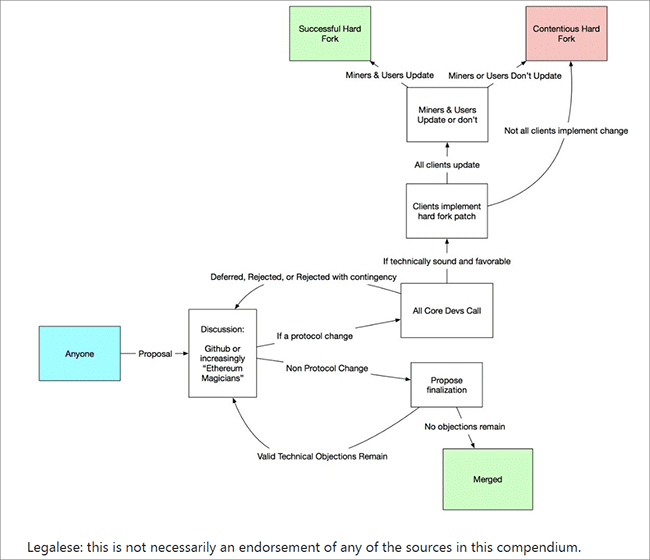 Alright, so how does this exactly work?

Up next, we have the consensus mechanism. Ethereum is currently using Proof-of-Work(POW), though they are going to move onto Proof-of-stake (POS) next. Tezos is using Liquid Proof-of-stake (LPOS)

The idea of POW is for miners to use their computational power to solve cryptographically hard puzzles. The miner who gets to solve the problem, adds a new block to the blockchain and receives a block reward in return. This how the process works:

The biggest asset of POW mechanism is the security it brings in to the system. Since mining on it is so expensive, the miners don’t have any incentive to work against the system, and mine on any parallel chains just to waste their money for no reason.

Ethereum in the future – Proof of Stake (POS)

Ethereum plans on using POS via the Casper Protocol. Proof of stake will make the entire mining process virtual and replace miners with validators.

Casper is the POS protocol that Ethereum has chosen to go with. Casper is a protocol that utilizes POS with a punishment mechanism. Let’s look at how POS under Casper would work:

Before we take a closer look at LPOS, let’s understand what liquid democracy means.

How does liquid democracy work?

Liquid democracy is a system that fluidly transitions between direct democracy and representative democracy. 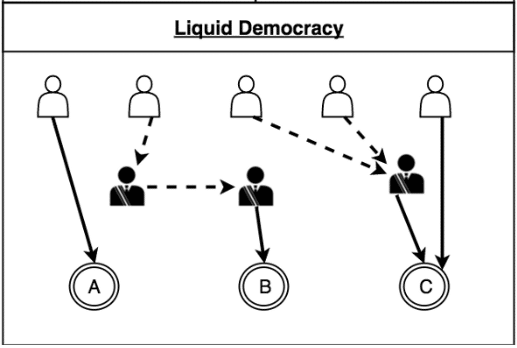 The process has the following features:

So, what are the advantages of liquid democracy?

What is Liquid Proof of Stake?

Tezos is a liquid proof of stake system that requires one to stake a certain number of Tezos token to participate in the consensus over the blockchain. The process of staking Tezos tokens (XTZ) is called baking.

Token holders aka “bakers” can delegate their validation rights to other token holders without transferring ownership. This idea is very different from Ethereum where the entire network takes part in the consensus mechanism and EOS where voting rights are delegated to a handful of members.

You find and add blocks to the Tezos blockchain through a process called “baking.” This is how it works:

As we have said before, token holders have the option of delegating their baking rights to other holders without letting go of the ownership of their tokens. Upon the completion of the baking process, the baker will share their rewards with the rest of the delegates.

Since both of these platforms are smart contract platforms let’s now talk about the languages you will need to learn to code on top of them. Ethereum uses Solidity which is an imperative language while Tezos uses Michelson which is a functional language. Let’s understand the difference between imperative and functional language before we continue.

When it comes to languages, they belong to two families:

So, as you can see, the addition process takes over multiple steps and each step is constantly changing the state of the program as they are all being executed in turn individually.

An addition process took four steps and the steps are:

So, how does functional programming work?

This makes the functional approach easier to reason mathematically. This is why functional programs are supposed to be a more secure approach to smart contract creation. This also aids in simpler Formal Verification which pretty much means that it is easier to mathematically prove what a program does and how it acts out.

Let’s take a real-life example of this and see why it can become extremely critical and even life-saving in certain conditions.

Suppose, we are coding a program that controls air-traffic.

As you can imagine, coding such a system requires a high degree of precision and accuracy. We can’t just blindly code something and hope for the best when people’s lives are at risk. In situations like these, we need a code that can be proven to work to a high degree of mathematical certainty.

This is precisely why the functional approach is so desirable. This is why Tezos is using OCaml and their smart contracts are using Michelson.

The following table compares the Imperative approach with the Functional approach.

Solidity is meant to be a purposefully slimmed down, loosely-typed language with a syntax very similar to JavaScript. You can check out the Solidity Docs right here.

Using Solidity you will be coding smart contracts which are going to be executed in the Ethereum Virtual Machine aka EVM. Ethereum developers mention a set amount of gas which is assigned to their contracts. Each line of the contract requires some amount of gas to execute. The gas limit should be enough for the contract to execute completely.

Having some prior knowledge of JavaScript could be useful to learn solidity because of the following two reasons:

If you want to learn more about Solidity, then you can check our guides here and here.

Tezos has been coded using OCaml. The smart contracts that will run on Tezos will be created using Michelson. So, what is special about these languages? They both happen to be functional languages.

In Ethereum, smart contracts are written in Solidity or Viper and they get compiled to EVM byte code, which then gets executed in the Ethereum virtual machine (EVM). In Tezos, there is no unnecessary extra step and the Michelson code itself gets to run in the Tezos VM.

Following is an example of a Michelson contract

The biggest advantage of the functional approach is that it helps with creating a high assurance code because it is easier to prove how the code is going to behave mathematically.

The disadvantage though is the fact that there is a lack of experts in the functional programming field because these are simply not that popular.

Let’s do some stat comparison between Ethereum and Tezos. Our data set will be between 9-13 June.

Tezos VS Ethereum: Number of blocks per day 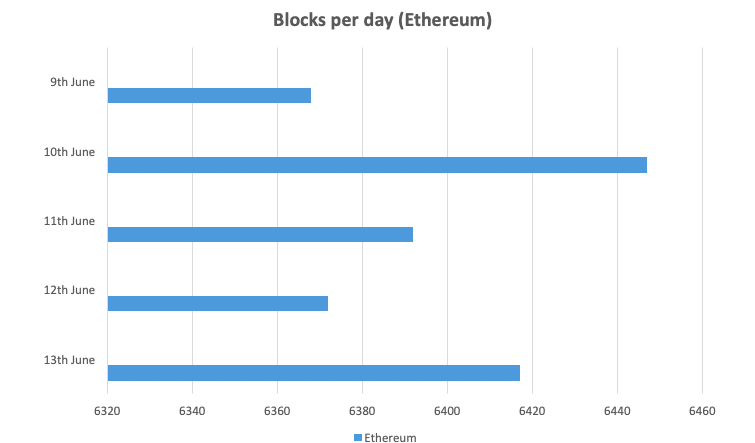 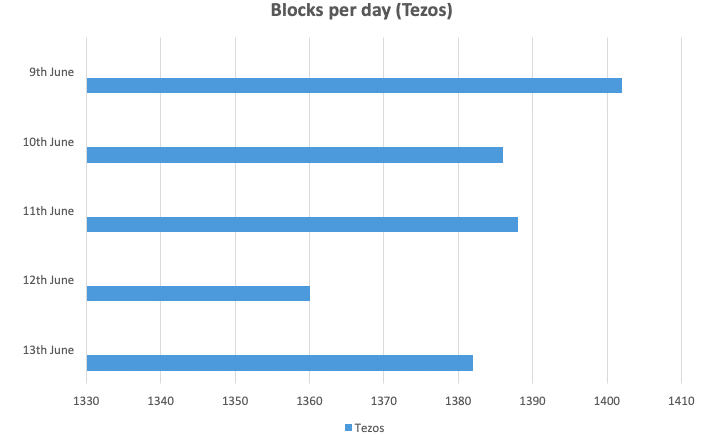 Ethereum produces 4-5 blocks per day because it produces one block every 15 seconds while Tezos produces a block per minute. 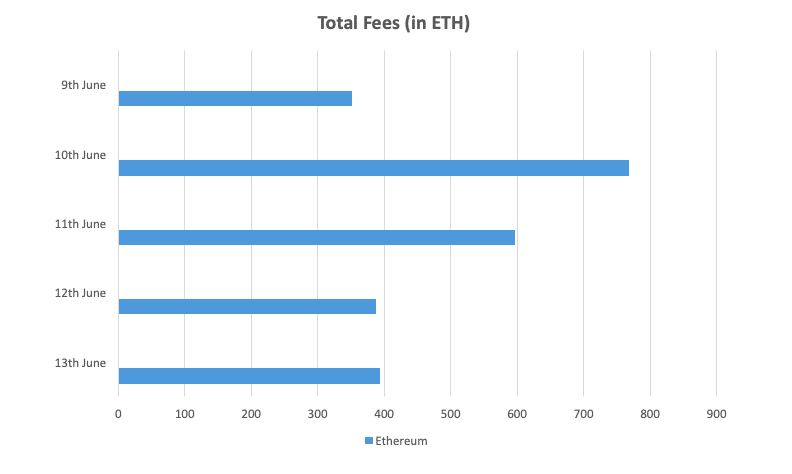 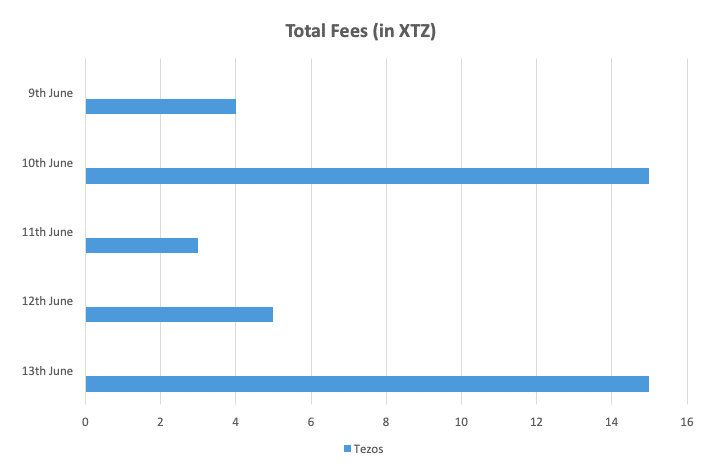 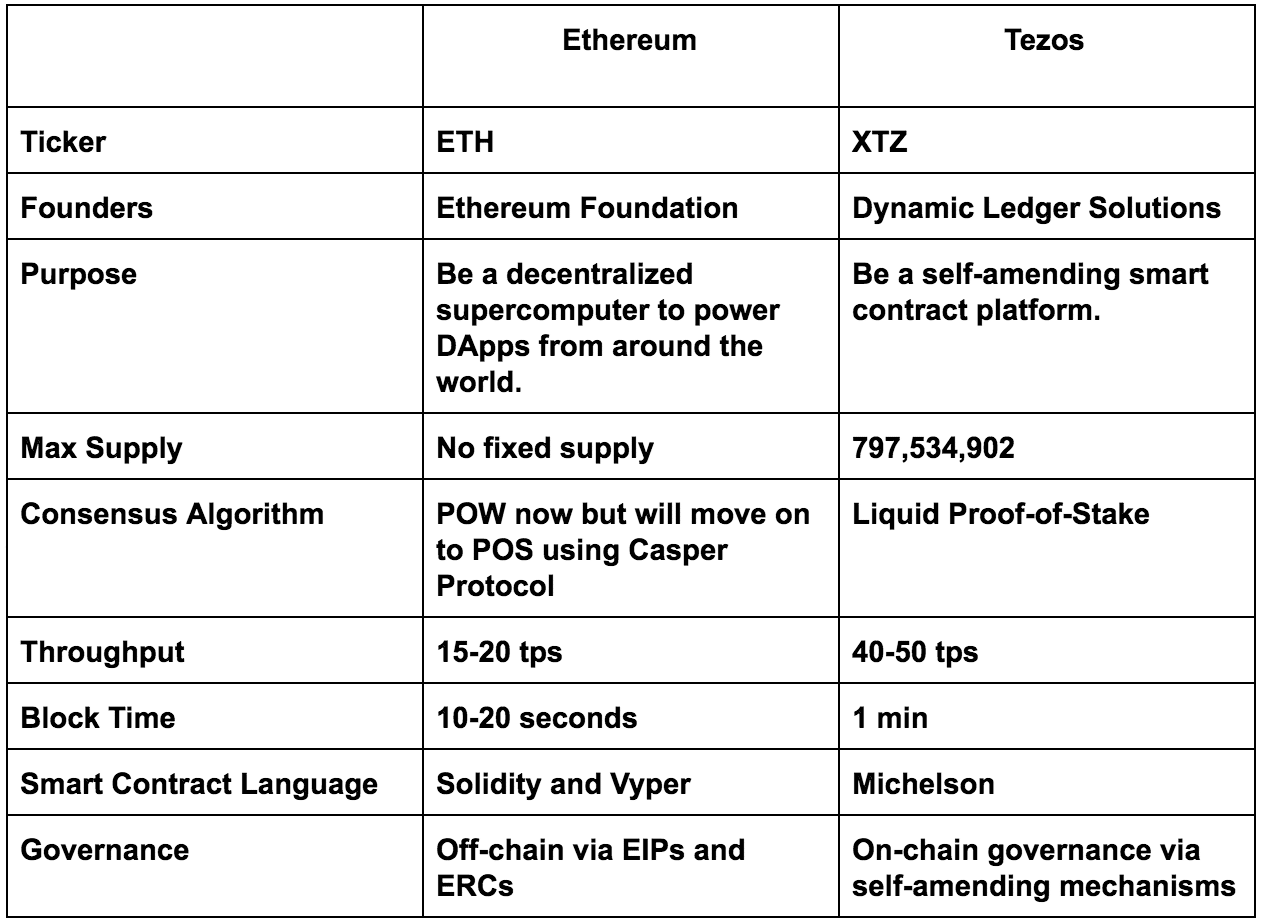 Ethereum and Tezos are both exciting smart contract platforms. While Etheruem is the poster-child of this space, Tezos is bringing in an interesting platform which continually improves and amends itself during run-time. It will be interesting to see how both of these grow in the near future.

If you want a simple way to easily buy Ether by just using your credit card then click here.

148
2
Have a question? Ask our Community

DeFi - What in the world is Decentralized Finance? The Most Comprehensive Guide

DeFi - What in the world is Decentralized Finance? The Most Comprehensive Guide