Bitwise Claims 95% Of All Bitcoin Trading Volume Could Be Fraudulent

1/ New Research from us @BitwiseInvest.

As part of 226 slides presented to the SEC on our ETF filing, we did a first-of-its-kind analysis of *order book data* from all 81 exchanges reporting >$1M in BTC volume on CMC.

TLDR: 95% of reported volume is fake but LOTS of good news! pic.twitter.com/TuXLlDCRyP

The firm’s researchers remark that while some expect for Bitcoin markets to be “uniquely orderly and efficient, with tight spreads and nearly perfect arbitrage,” this isn’t exactly reality. Through a multi-part slide deck, Bitwise explains that this budding ecosystem is often disjointed, with there being great discrepancies in exchange prices.

It explains that in reality, volumes registered on “data aggregators” like CoinMarketCap could be 95% false “and/or non-economic in nature.”

To back this foreboding fact, which would mean that the $9.3 billion in measured Bitcoin volumes could actually be as little as $465 million, Bitwise draws attention to “suspicious exchanges” such as the little-known CoinBene, which sported nearly half a billion in Bitcoin volumes on a day in early-March.

CoinBene purportedly utilizes “trade printing” between the bid and ask prices, hinting that there could be a bot behind much of the trades. In another case, a platform known as RightBTC had a number of periods, which extended to “multiple hours and days,” that had zero volume, even though it claims to have “roughly 4x the volume of Coinbase Pro.” Lastly, it calls on CHAOEX, which sported trading periods that looked extremely “monotonic.”

All this, coupled with analysis of trade size histograms, volume spike alignment, and spread patterns led Bitwise, which compiled data from 81 exchanges, to claim that more likely than not, nearly all Bitcoin trading volumes aren’t bonafide.

While Bitwise’s report only pertained to Bitcoin trading activity, other reports suggest that the issue with fake volumes are industry-wide.

Crypto Integrity, a blockchain-centric research division that specializes in market manipulation and fraud, explains that there’s a high likelihood that 88% of all cryptocurrency trading volume seen on exchanges during February is entirely false. Integrity’s data science team specifically draws attention to OkEX, Bit-Z, Huobi, HitBTC, among a handful of other relatively unregulated exchanges as perpetrators.

Speaking to Decrypt, a team member from the research group explained how it gathered this information:

“[We built] a system that collects low-level market data from exchanges (order books as well as trades). It allows us identify what no one is able to find on charts or by the analysis of trades & volumes.” 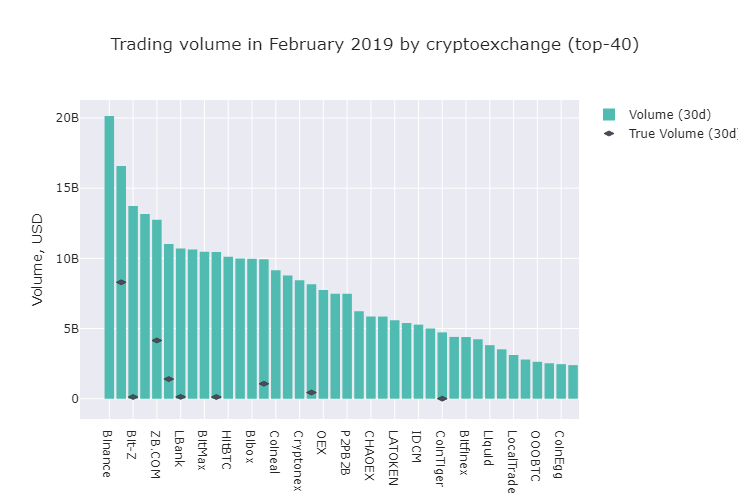 Although Bitwise addressed this issue to seemingly calm regulators’ qualms with this asset class, some fear that these scathing reports doom cryptocurrencies to long-term failure.

Case in point, when the U.S. Securities and Exchange Commission (SEC), which has direct oversight over certain American crypto vehicles, denied a series of exchange-traded fund (ETF) applications, it cited manipulation. More specifically, the entity, known for having a few crypto insiders, remarked that the fact that markets are not of “significant size,” cannot be properly surveyed, and are subject to liquidity concerns was the leading reasons for its disapproval.

Yet, Bitwise’s Hunter Horsley has kept his head high. When questioned about the SEC’s fears of Bitcoin in a CNBC interview, Horsley responded with confidence. The former Facebook and Instagram product manager explained that from his firm’s point of view, the SEC has “a lot more understanding in place” regarding the state of cryptocurrency markets. And while “the numbers you see on various crypto-related websites [often] aren’t accurate,” Horsley pointed out that a fleshed-out comprehension of the industry’s inner workings is what truly matters. Concluding his comments on the SEC’s role in the Bitcoin ETF realm on an optimistic note, the industry heavyweight stated:

“Leverage ETFs took five years. Actively-managed ETFs took six or seven years. Even gold, which has been around for thousands of years and had a product in Australia, took three years from S-1 to initial launch. And I think that the fact that the SEC has taken a couple of years to get comfortable with [cryptocurrencies] makes complete sense. It’s not that they are anti-crypto, but they’re pro-investor.”