A Concise History of Blockchain Technology

For a complete rundown on what blockchain technology is and why it matters, check out our ultimate guide: Blockchain For Beginners: What Is Blockchain Technology? A Step-by-Step Guide.

Blockchain technology has been a topic of research since the early 90s and was used as a database structure to store documents and hashes. Today, blockchain technology provides a foundation for the new form of ‘digital trust’, where users across the network can transfer value and information without relying on a central intermediary. This new form of digital trust will bring disruption across various industries that rely on ‘gatekeepers’.

To understand blockchain technology and its implications beyond the realm of cryptocurrencies, we need to learn the history of blockchain to realize the potential of this new form of digital trust that has the potential to disrupt industries across various sectors.

Blockchain made its public debut with Bitcoin when Satoshi Nakamoto published a whitepaper back in 2009. There’s no single blockchain inventor, however, the origins of blockchain technology can be traced back to 1991 when a physicist Stuart Haber and cryptographer W Scott Stornetta released a research paper titled, “How to time-stamp a digital document”.

The research paper discussed the immutability of digital records with a Time Stamping Service (TSS) that uses hash functions and digital signatures to verify the originality of a specific document. The documents are chained together to generate a time sequence to verify the time-stamps associated with each document. This chain of documents with a time sequence was the simplest version of blockchain that was later used by Nick Szabo in Bit Gold, an early version of the digital currency.

Fast forward to 1998, a renowned computer scientist Nick Szabo started working on an idea of a decentralized currency, which he called ‘Bit Gold’. He published a whitepaper where he proposed a time-stamped hash chain (blockchain) that can solve the double-spending problem using hashcash, an early version of the Proof-of-Work system to limit spam on internet forums and emails.

Bit Gold introduced the concept of value based on the cost of computational resources. The value of the ‘bits’ is calculated based on a complex mathematical equation. All the bits are stored on the blockchain together with their value that is correlated with the cost of their computation.

The idea of Bit Gold didn’t materialize as Nick Szabo was not confident about the implementation. The biggest shortcoming of Bit Gold was the correlation between value and cost of computation. In Bitcoin, Satoshi Nakamoto separated the value from computation cost, and the value is determined by the open market.

In 2000, Stefan Konst proposed the idea of cryptographically secured chains in a research paper titled “Secure Log Files Based on Cryptographically Concatenated Entries”. He presented a model where entries in the chain can be traced back from the genesis to prove the authenticity, the same model we see in Bitcoin and other cryptocurrencies today. In 2008-9, Satoshi Nakamoto released the whitepaper of Bitcoin by accumulating all the ideas of a distributed ledger coupled with the secure cryptographic functions, presenting a practical use-case for blockchain.

What Is A Blockchain Protocol?

In the blockchain protocols, the value concentrates at the protocol level because of the shared data layer and economic incentivization with a unit of value (coin or a token). Unlike TCP/IP, the data in blockchain protocols isn’t confined to centralized applications and is available on an open and decentralized ledger.

This data availability across the shared ledger is a cornerstone for innovation. It allows new entrants to benefit from the existing data, build competitive products, and reduce the barrier-to-entry that is prevalent in the centralized ecosystem.

The consensus mechanism serves as a key component when it comes to maintaining the single global state of the blockchain and establishing finality through digital trust. Finality is a guarantee that the transactions are now immutable and part of the blockchain. The consensus mechanism solved the age-old problem of ‘double spending’ by allowing protocols to verify each transaction since the genesis block and making sure all the data that goes on the blockchain is immutable.

What is Double Spending?

Double spending refers to a flaw in the early variants of the digital cash system, in which a single digital coin can be spent more than once. If you have a $10 bill, you can only spend that once. If you spend $10 in a digital form (using debit card or PayPal), the payment processor ensures that money is deducted from your account. However, in a decentralized mechanism without the bank or a central intermediary, it is difficult to keep track of ownership. Consensus mechanisms solve the double spend problem by keeping track of the ownership of coins from the genesis block (the first block on the blockchain). If you spend a coin, the ownership changes and the transaction is recorded on the blockchain.

Hashcash was the earliest form of consensus mechanism that inspired the design of Bitcoin’s Proof-of-Work model. Hashcash was the brainchild of Adam Back, a prominent British cryptographer and cypherpunk. The idea of hashcash was to limit the spam on emails and the early days of internet forums.

Adam Back proposed a solution in his paper published in 2002, where each user has to compute a complex mathematical equation before posting anything on a forum or sending an email, and he called it the Proof-of-Work. Imagine a user sending 1,440 messages every day without any delay. If he has to compute a mathematical equation that takes 1 minute to solve before sending a message, it will reduce the number of messages he can post by 50%.

This approach was the earliest form of spam prevention technique. Satoshi Nakamoto used the same approach for Bitcoin’s Proof-of-Work model but with a more sophisticated implementation.

Satoshi Nakamoto combined the Proof-of-Work concept from Hashcash with the blockchain and created a global and immutable distributed ledger for Bitcoin. In Bitcoin’s Proof-of-Work consensus algorithm, the miners have to solve a complex mathematical equation using specialized hardware. The equation is very hard to compute, but easy to verify.
If a miner solves the equation and the entire network verifies the answer, he is rewarded with a few bitcoins (currently 6.5 BTC per block) along with all the fees of transactions he included in his block. Proof-of-Work is not just a de-facto consensus mechanism used in Bitcoin. It is currently being used in Ethereum, Litecoin, Dogecoin, and others. 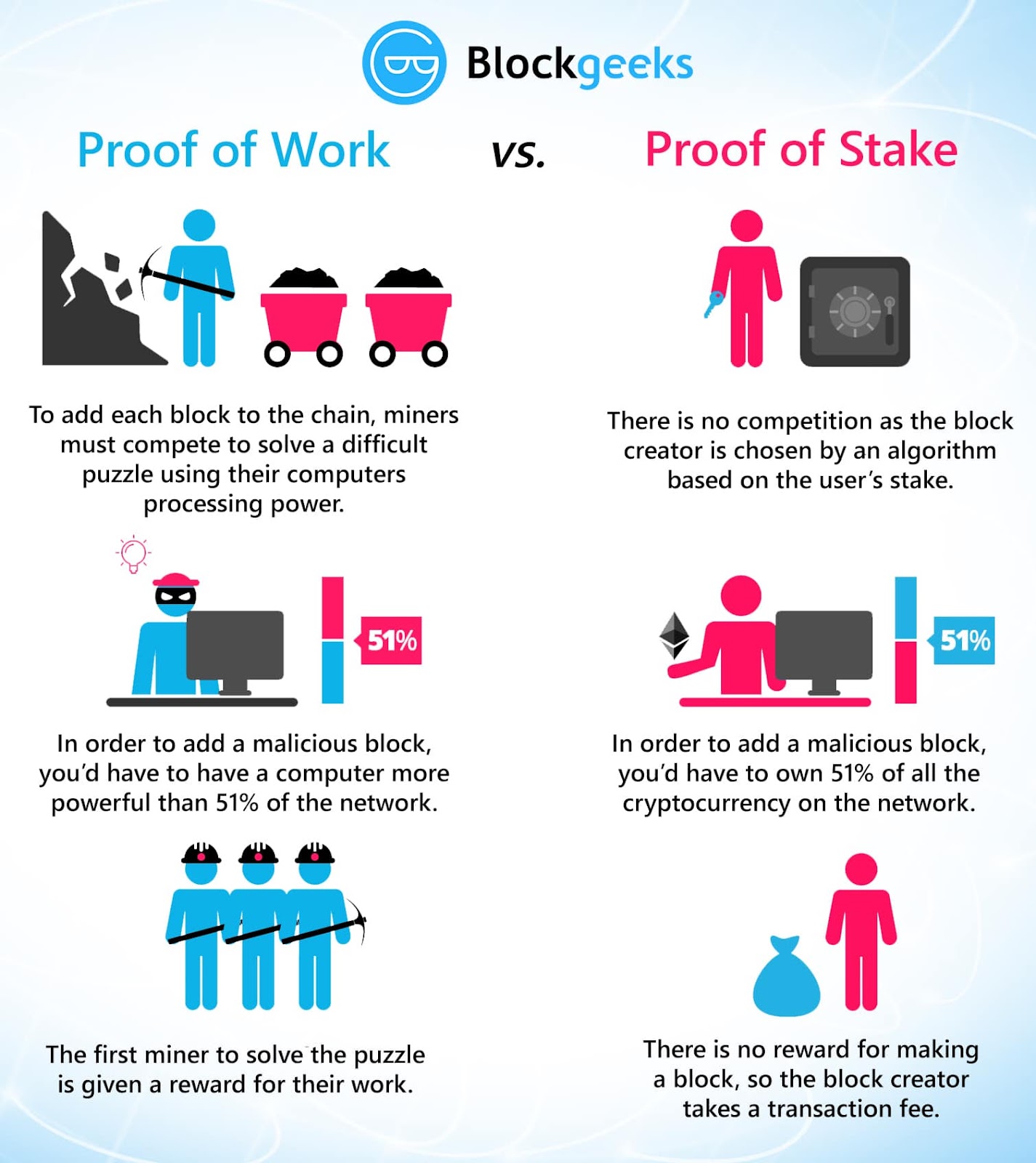 Proof-of-Stake has many different variants, one of which is Delegated Proof of Stake (DPoS), where the ‘delegates’ are elected by a voting process among the users who have a stake in the network. The delegates are responsible for block production and finality. If a delegate acts maliciously, users can vote him out and assign another delegate.

Proof-of-Stake based blockchain protocols have higher transaction throughput because the system doesn’t rely on physical resources or high infrastructure costs, which also makes them more environmentally-friendly.

Proof-of-History is a relatively newer consensus mechanism launched by Solana. It uses a Verifiable Delay Function so all the participants in the network can reach a consensus on ‘time’ to avoid the ‘longest chain rule’. Proof-of-History is the ‘clock’ of the network, and it works in conjunction with the TowerBFT algorithm, which prevents malicious attacks on time parameters. When validators on the network vote for a specific block, they have to receive a confirmation from Proof-of-History before they can vote on the next block. The blockchain consensus is an ever-evolving space, as protocols seek new and efficient ways to achieve consensus and finality on the blockchain. Proof of Authority and Proof of Burn are two of the recent consensus mechanisms we have seen, and there are a lot more in the pipeline.

What Was Blockchain First Used For

In recent years, blockchain technology has made its way to enterprises and institutions, as they see a massive opportunity by adopting blockchain to cut costs and improve certain business processes. Surprisingly, the adoption is mainly coming from traditional financial institutions as they seek to improve their processes around cross-border payments and settlements.

The Bitcoin blockchain is very simple yet powerful. Satoshi Nakamoto launched the Bitcoin network after the 2008 financial crisis, with this simple message that he embedded in the genesis block. This can be thought of as the start of bitcoin blockchain history.

The bitcoin blockchain doesn’t provide much flexibility in terms of building applications on top of it, but provides a robust economic security model that secures the network with an extraordinary amount of hash power.

Bitcoin is sound money; it’s the digital gold. Due to its powerful economic security model, Bitcoin dominates the entire cryptocurrency space and holds 45.9% of the market share as of writing. Last month, Taproot got activated on the Bitcoin network, which was a long withstanding upgrade that brings more security and an ability to run limited smart contracts on top of the Bitcoin blockchain.

Vitalik Buterin, one of the co-founders of Ethereum, wanted to bring flexibility to the Bitcoin network by introducing smart contracts. However, due to the consensus rules of the Bitcoin network, he realized that the Bitcoin blockchain isn’t suitable for running applications on top of it.

Due to the massive utility of Ethereum due to its ever-growing ecosystem and popularity, several Layer-2 solutions have been developed to overcome the limitations of Ethereum such as high gas costs and low transaction throughput. Ethereum is soon shifting towards Proof-of-Stake consensus in the Ethereum 2.0 upgrade that will bring further scalability and efficiency.

Blockchain technology made its public debut in Jan 2009 with Bitcoin, providing means for a decentralized, borderless, permissionless and trustless exchange of value without any bank or a central intermediary. Blockchain has disrupted currency, and is now disrupting various industries by bringing in a new form of ‘digital trust’.

Blockchain is the new form of internet 2.0 and money 2.0!

Matthew Baggetta
Matthew is a B2B SaaS content strategist currently working as an Editor at a major financial technology services company. Before that, he worked at Blockgeeks as their Chief Content Officer; where he successfully created the most comprehensive and accessible library of crypto and blockchain courses in the world. Matthew is all about helping organizations master their buyer's journey and helping to create strategic content plans that achieve measurable business outcomes. He knows how to write a piece that readers will want to read and generate organic traffic. Creating high-ranking content is what Matthew enjoys but one day he aspires to travel the world and live off the radar. You can connect with Matthew on Linkedin while he’s on the radar.

0
2021-07-28 16:41:41
Have questions? We have built an incredible community of blockchain enthusiasts from every corner of the industry. If you have questions, we have answers! Ask community

What is Blockchain Technology and How Does it Work?
0
Hungry for knowledge?