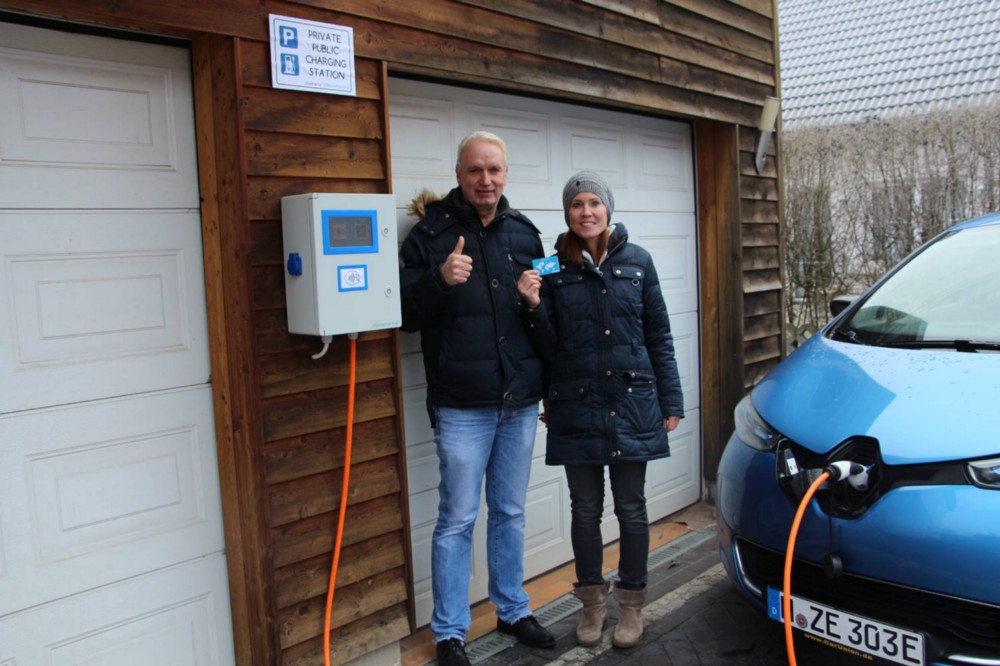 Blockchainfirst’s aim for 2017 is to deliver functional, tangible, real-life blockchain-enabled products for everyone. At the beginning of this year, we launched our blockchain-enabled multi- purpose charging station for electric cars and motorbikes.

The Charging Station can be operated by governments (B2C), companies (B2B/B2C) as well as private people (P2P).

According our mission “Blockchainfirst bring together IoT Devices and Blockchain Technology” last year we presented a bunch of Blockchain enabled IoT Devices like:

After having presented our solutions at last year’s International Blockchain Week 2016 in Shanghai, we received a lot of positive feedback and realized that we were on the right track. Thus we decided to invest more into developing real and easy-to-understand use cases for everybody — based on IoT and blockchain technology

Due to the slow, yet the steadily growing market for electric driven cars and bikes (and even vehicles we’ve never seen before), we believe it to be essential to have not only many more EV charging stations, but smarter ones at that. Currently, most charging stations are either free to use, or one has to register with a local provider in advance, authorizing them to charge from one’s bank account. If the charging station takes credit card payments, the fee is still as high as other, more general credit card payments.

The market is pretty fragmented and centralized. It can happen that driving to a different city and needing to recharge the EV might be impossible, due to different local EV charging providers (at least this is the case where I come from in Germany). There are a few hurdles one has to deal with when driving from city to city and wanting to recharge one’s EV.

Private-public parking spaces (e.g. exhibition grounds, university campuses, business parks) require a standardized payment system for part-time or one-time users — without the need to pre-register with a local provider in advance. P2P charging is de facto still impossible, as private users do not wish to sign a contract with a payment provider for a single charging station at their home.

This lead us to the idea of developing an EV charging station for smart cities based on blockchain technology and for a sharing economy where people have easy access to and sufficient supply of EV charging services.

Blockchain-enabled basically means that the end-user has an easy and secure payment system which uses cryptocurrencies such as bitcoin or Ether, either using a standard wallet app or RFID/NFC card. The main advantages of paying for a charging cycle this way are:

Where we are right now

Over the past three months, we have developed a multi-purpose blockchain-enabled outdoor charging station for electric driven cars and motorbikes. This charging station is ready to use and operational, and we are about to roll-out to some stations within the next few weeks. The charging stations can be installed in walls as well as street lamps or pillars. The charging station fulfills all necessary industrial requirements and standards according to IEC 61851–1 and CE. The official approval is still pending, as we are currently still designing a modern looking casing.

On 16th January 2017, we successfully accomplished our first full P2P charging cycle in Germany using our Ethan BIoT© Charging Station. Many thanks at this point to Alexandra Grefe for joining us and being so brave in trying it out!

At the heart of our charging station lies an industrial SOC (System On Chip) with built-in cryptographic functions. It operates on a Linux operating system and can run either a full ethereum blockchain node or a light client. The SOC sits on an electronic board with a bunch of GPIO (General-Purpose Inputs and Outputs).

Due to the modular structure of our industrial Ethan BioT© Device, it can be integrated into other charging systems, as well as in other industrial environments such as gate openers, autonomous cars et al.

The Ethan BIoT© Charging Station can be installed outside and everywhere. As a blockchain client (light client) operates inside the charging station, it captures any kind of data and transfers it directly, securely and tamper-proof into the blockchain. Therefore, as an add-on, we have developed a built-in IoT Oracle with up to 6 sensors which capture data like air pollution, temperature, humidity, etc. The accuracy of the environmental data in a particular region grows with every charging station. Using this device, capturing environmental data has never before been as easy or as economic.

How to pay for a charging cycle

There are two ways to pay:

Firstly, you can use a wallet app, like Jaxx, Coinbase or Freewallet. Users scan a QR code which is displayed on the touchscreen of the charging station and input their required amount. When the transaction is confirmed, the touchscreen prompts you to plug in the charging cable to your car. The charging cycle begins automatically.

Secondly, you can pay with an NFC card. We call this card the Ethan Card. The NFC card is basically a wallet and a wallet address. The user can purchase a prepaid card with different amounts, e.g. 10, 25, 50, 100 USD or EUR or any other Fiat currency. The amount the user purchased is stored in a cryptocurrency such as bitcoin or Ether. The user may otherwise buy an empty card and send any amount of Ether or bitcoin to the card‘s wallet address. The Ethan Card can be recharged at any time with any amount. In order to prevent unauthorized use, the card has a 4-digit PIN code.

Challenges we have to face while developing such a system

Charging an electrically driven car is a pretty complex process. There are various industrial standards and different types of cars involved. While charging, the car communicates with the charging station and every manufacturer has to implement this protocol accordingly. The environmental requirements are quite high. The charging station must operate at temperatures of -20 to +60 degrees Celsius (-4 up to 140 Fahrenheit). All the components inside an EV charging station must fulfill these requirements and be operational under these harsh conditions. In the end, we found a solution for every issue faced. Due to the modularity of our EV charging station, we could allocate different development tasks to separate engineers. Our charging station designs won’t win design awards, but we are planning on letting designers work out modern looking cases. However, as a proof of concept, we should be alright for now.

We are about to implement a so-called “Long Range UHF RFID Reader” into the charging station. This technology allows payments to be automated, for example by an autonomous car itself. We’re going to publish more on this technology within the next month. Our core technology “industrial Ethan BIoT© Device” can be easily integrated into other use cases, e.g. to open a gate in order to get access to particular areas or smart meters. We think our Ethan BIoT© devices can make cities smart and smart cities even smarter. Therefore, we will continue to develop further real use cases within the next month.

Juergen Schaar
I'm opend minded and always interested in innovations, new technologies e.g Blockchain Technology. As as an Entrepreneur, Software- and Electronic Engineer for more than 25 years i have seen coming a lot of new technologies. However Blockchain technology without any doubt has the most potential to change the way how we do business, how we work and how we are going to live in the future. I never ever seen a new technology its impact will effect our society this big, but in a much better way. In July 2016 i founded the company Blockchainfirst based in Singapore. We aim to bring IoT (Internet of Things) and Blockchain together.

dissertation editors near me https://helpon-doctoral-dissertations.net/

how to cite dissertation apa https://dissertationwriting-service.com/