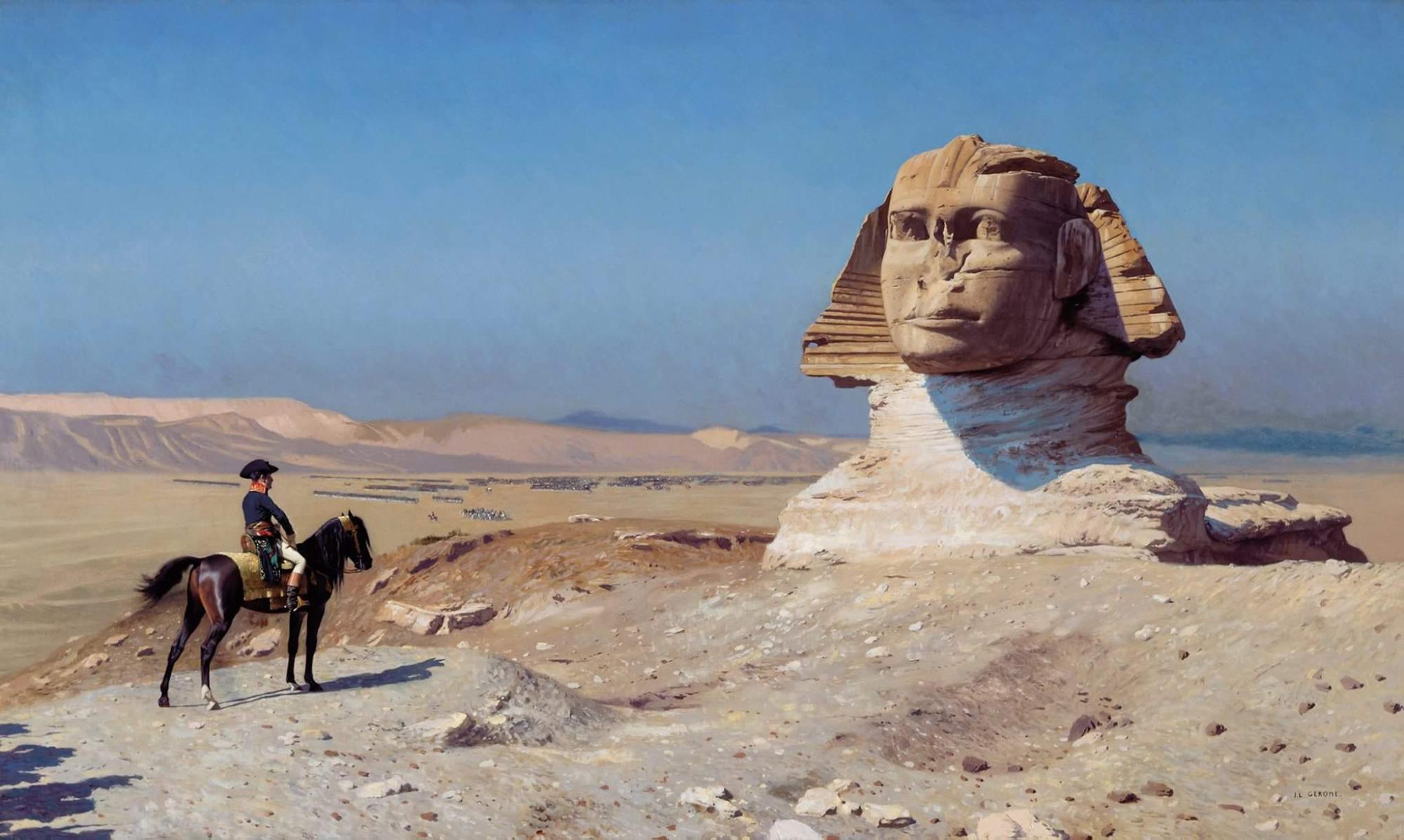 Blockchain vs Fiat: A Confrontation of Ages

By kontegna
Disclaimer: The views and opinions expressed in this article are those of the authors and do not necessarily reflect the official policy or position of Blockgeeks A fresh look at the difference bet
Tweet
Share
Share55
WhatsApp

It’s been almost a decade, and we are still trying to explain why blockchain money is any better than fiat or “money as usual.” Sadly, this topic has already become a huge bore. The basic premises of decentralized banking, deflationary currency, libertarian economics, and the theoretical fraud-resistance of blockchains has mostly fallen on deaf ears.

To be sure, there is a real battle raging between two different approaches to monetary control—between old and new power structures. And, where these two meet, overlap, mix, and compete is where the real action is! To be a fly on the wall during the board meetings of financial institutions or to hear the pitch of some upstart “blockchain financial technologist” to these giants of financial clout would be equally entertaining as exhilarating. Lacking access, though, we do not get to see the essence of the backroom deals between the fiat bigwigs and the new blood of crypto startups.

What are they are up to?

What’s going on inside those consortia which try to implement “private” blockchain architecture for banks? Why did Goldman Sachs, Banco Santander, and others flee from R3CEV? Did they discover such a bright engineering insight that it must not be shared? What do they really think about what is likely to be the futility of hand-reared blockchains? There are no definite answers from behind the wall, just “expert” speculations.

But, there are places where one can observe the contact between fiat and blockchain in real time. Those are the startups that offer “assets-over-blockchain” services. Some of them are actively promoting themselves trying to pull banks and even central banks into their orbit. Technically, the essence of such service is primitive. Blockchain-based tokens have a nominal next-to-zero face value on the native network. What gives them value is the inclusion of metadata that records someone’s promise of something in the physical world. We have had some engagement with two of such startups. One does the transport of a meta-coin on top of Bitcoin, another uses more natural Solidity tools to do the same on Ethereum.

Here’s some new interesting contradictions and misunderstandings we have learned there. That really added to our perception of the fiat-blockchain difference, and we would like to share that with you.

Dealing with something familiar, one is hardly expected to change her basic understanding of the matter. Fiat money as they are today can not be perceived correctly at the conventional level of thinking; there’s no “intuitive” mind gate there. Fiat is not simple. It cannot be described without care in the use of the terms. Once we clearly define the concepts and start using them in a formally correct way, it turns out that fiat is an unnatural and pathological thing. However, it is important to realize that the only way of thinking about money that currently exists in the banking reality is terms of fiat.

Entrepreneurs who move towards fiat-associated services from a blockchain/bitcoin background base their thought pattern on experience with Bitcoin and Ethereum. They perform a very clear and correct technological thinking about payments. But at the same time, highly inappropriate thinking.

Blockchainers address a bank with something like this: “Here are your tokens, they are like cash “traveling” from point A to point B and further to point C in a reliable, convenient and extremely inexpensive way. Glue some value to these tokens by backing the promise with some reserves or your reputable name. Then, Profit!” 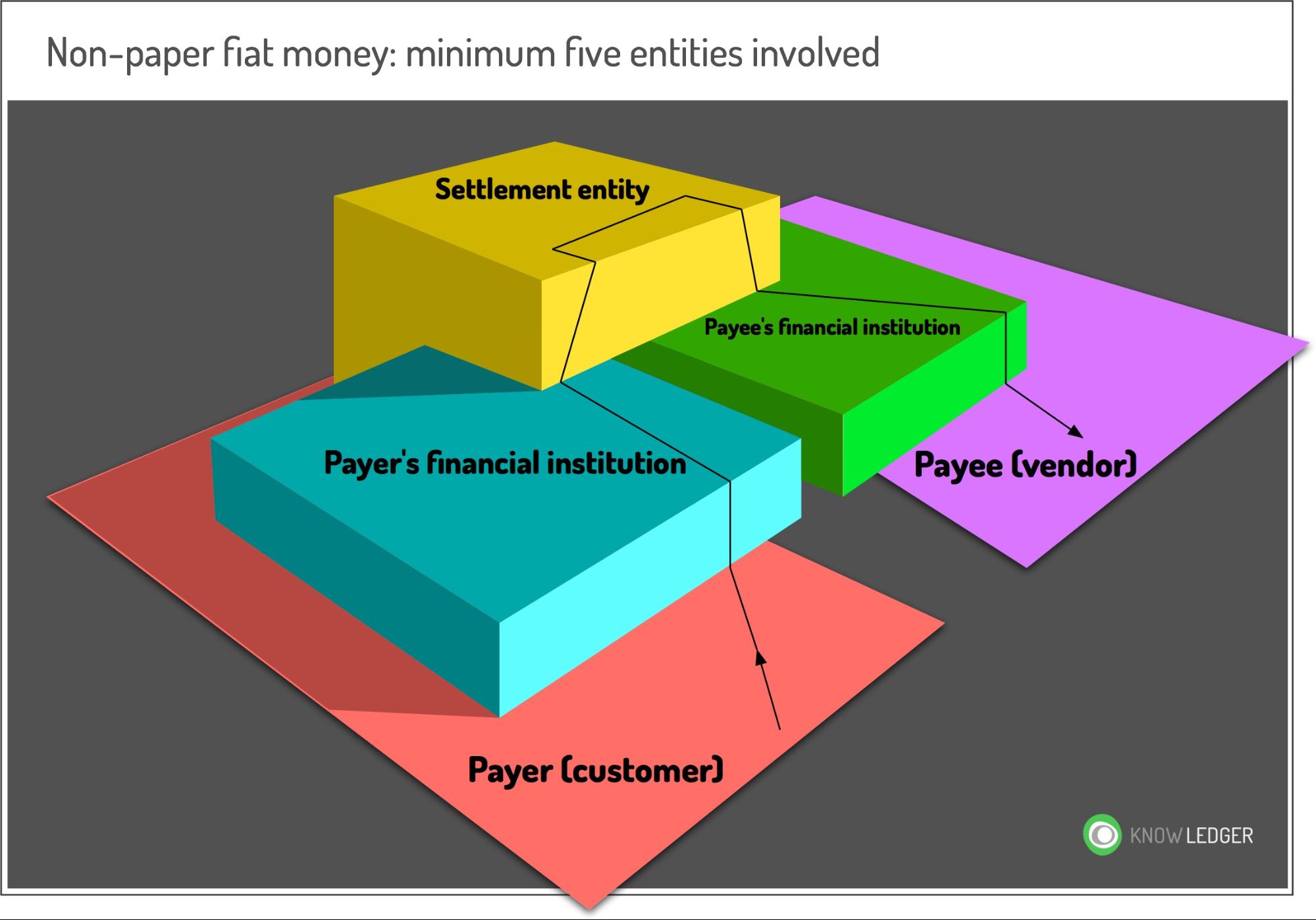 Why do they always miss?

Here is why: the diagram above shows the single quantum (the minimum existing element) of money. Perhaps we should note that we consider a quantum in payments context, so we don’t talk of some abstract static investment penny. The rest should be self-explanatory: there are at least five participants, located on at least three levels. If you think in bitcoiner terms, each “coin” dies on the settlement level with a clone being sent to the payee.

So, what’s the main point? There is no transfer from A to B at all ever! The only exception is paper cash. But the key words here are “THE only exception.” It is impossible to make “new cash” or “crypto cash.” Inside a banking brain, “just like cash” has no meaning. Payments could be different. There could be hundreds of variations of the above scheme, and they are, with infinite complications but with no simplifications ever. It is impossible to “cash” if it’s not actually cash.

Here’s another important thing. Not only there is no such thing as a direct transmission from payer A to payee B, but also, there is no money in existence to consider unless the full set of participants is in place and watching. No observers, no money. That’s really a time to recall Schrodinger and his cat! This phenomenon is not even seriously considered in the blockchain community. Also, we should mention some weak echoes of that in the rhetoric of the “trust-less-ness” (the absence of a need for authority who is trusted by all parties to the deal). We now see that the phenomenon occurs on a much deeper fundamental level.

Last but not least: at each stage, a live system of communication and the format of the messages (clearing) are present. They also constitute the money being an integral part of its quantum. One can’t just replace or tune any component. When we talk [fiat] money, it is not the law that follows but the technology, always being behind the law. The inalienability of the communication system entails the aspect of size. In fiat, different sizes of payments mean different networks. Those networks have substantial fundamental differences not only in accessibility of institutions participating but also in many purely technological senses. In the United States, for example, there are many levels of intermediary bodies and networks, such as Fedwire Funds Service, Clearing House Interbank Payments System, the Automated Clearing House, and others. Systems of the different levels are not directly compatible.

It turns out that big money, smaller money, and small money—are all different things of different nature. Making it even less natural, even within the same category, different countries host both incompatible and structurally different system of fundamentally different accessibility class. The table below shows the distribution of participants of various payment networks with an average number of the operations they perform. The difference amounts to hundred folds. From a blockchainer’s point of view, it’s an absurdity and inconvenience. Should a technologist prepare a framework for mice in one country, bringing it elsewhere to only find stegosaurus and no mice? 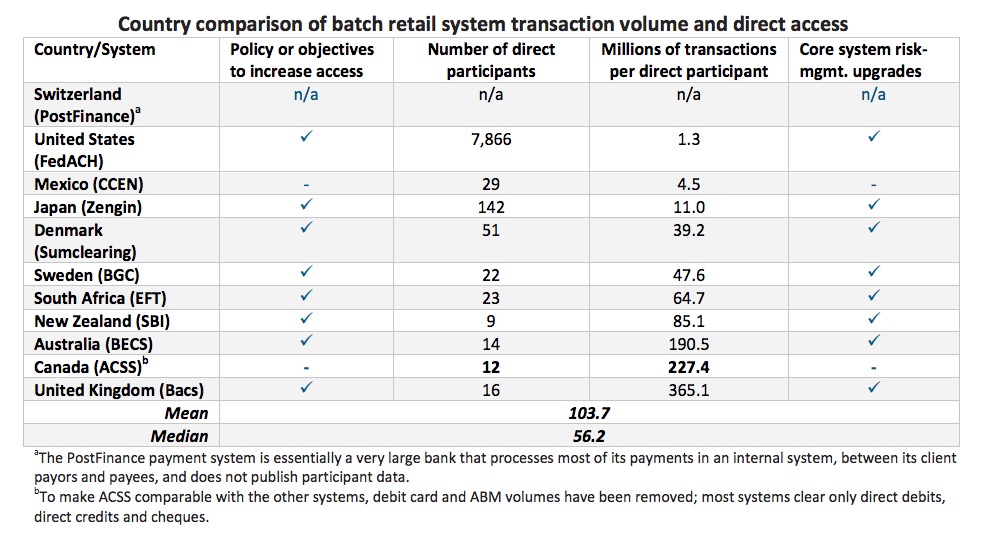 How miserable would an entrepreneur selling “assets-over-blockchain” to a bank appear as he starts his “pitch” with “p2p transfer of independently existing tokens”. A five words phrase containing three non-existent phenomena. Adding a psychological error to the terminology, one expresses the puzzlement of bankers lacking enthusiasm. Apparently, this is due to an incomplete understanding of the new technology, he thinks. No, it isn’t. The fact is that the above described inner fiat meanings are embedded and imprinted into bankers’ native thinking. A banker hears the story, comprehends an extremely broken—up to the illegibility of the message—language but still, no clear explanation comes to his mind.

How else should we explain to ourselves that the maximum success of fiat-over-blockchain projects over these years are the marginal examples of Barbados dollars and Crypto-bahts?

No Fools Around Here

Let’s try to get back to the big banks’ private party and knock on the back door with our own understanding of their reasoning, with the retranslated vision they have their mind trapped within a banker’s brain.

Bankers are not idiots. They crave something like the blockchain, its directness, and naturalness. Most of them are ordinary technicians and businessmen, not clearing the political consequences of fiat’s displacement. They should see perfectly that when it gets to money engineering, blockchain really is how it should be arranged. Less caring whether it is bitcoin or Corda. IBM and its division, Institute for Business Value, has recently conducted a study which revealed that in only one year about 15% of banks will be ready for field tests of blockchain technologies. 15%! Going live and commercial! A stunning 65% of respondents have expressed the same willingness but on a three-year horizon. IBM itself, by the way, can’t be blamed for stupidity and ignorance either: it is participating in building the Hyperledger and promoting a cloud-blockchain hybrid, Bluemix.

I have already written that banks are crypto-enthusiasts’ allies, not foes. But they too, just can’t change the rules and laws quickly. Moreover, at certain high levels, they will be rejected and asked to leave. 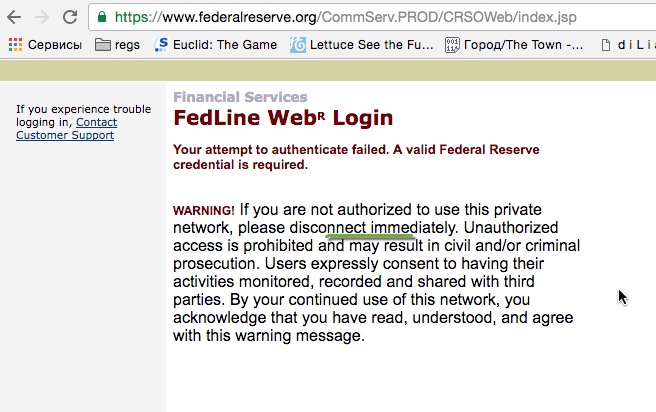 An extremely angry off-entrance pivoting on the site of the Holy of holies of our materialistic world.

To summarize, selecting from blockchain-driven fiat supporters and bankers not immune to blockchain ideas we would jump on the bank train. The former are really bad yet. Unfortunately, banks are soon to hit the limits and prohibitions too. Technological obstacles will join the legal ones and the block will become fundamental. One way or another, but the climax is approaching quickly. Not sure if Chandler Guo is right but he believes that every country that prints its own money is literally controlled by five or so families, who essentially compete for the opportunity to print. This opportunity they once in awhile hand to each other has recently started to change hands with accelerating frequency.