What Is Curve Finance (CRV)? A Look At Ethereum's Latest DeFi Token

On August 13th Curve finance developer team rolled out CRV to the Ethereum community. The 3% of the circulating supply distributed to past liquidity providers has been increased to 5%, with Curve seemingly wanting to reward those that have supported the protocol since early on. CRV currently trades on Uniswap, Moonswap, and other decentralized exchanges.

Curve has rapidly become a leading player in Ethereum’s decentralized finance (DeFi) ecosystem since its launch in January of 2020. Offering users a medium to earn returns on their cryptocurrency and to trade certain altcoins in a decentralized manner, Curve has rapidly become one of the largest protocols in the DeFi space, data from DefiPulse shows.

By definition, Curve is a liquidity aggregator. But in layman’s terms, it’s a decentralized exchange that promotes the creation of liquidity — a crucial facet of any financial market — by offering incentives.

As is the case with many other decentralized finance protocols, Curve wasn’t fully decentralized at launch, run by the Curve team, led by Michael Egorov, the founder of NuCypher with a Ph.D. in Physics.

This means that while it may be a great concept and plan, Curve as a protocol was then susceptible to the shortcomings (and benefits) of having a single entity determine its direction.

But this is changing with the introduction with a native governance token for the Ethereum-based application with the ticker “CRV,” which will establish Curve into a decentralized autonomous organization (DAO). Before we get into that, though, a bit more about Curve as a platform for decentralized exchange.

As aforementioned, Curve is a protocol focused on giving users a platform to easily swap certain Ethereum-based assets. As Michael Egorov, the aforementioned founder of the project, explained in a recent interview:

“Speaking of Curve, it’s an exchange expressly designed for stablecoins and bitcoin tokens on Ethereum.”

You may be asking, aside from its focus on U.S. dollar stablecoins like Tether’s USDT, USD Coin, and DAI and Ethereum-based Bitcoin tokens such as renBTC and Wrapped Bitcoin, what sets it apart from a textbook DEX?

The answer to that is somewhat complicated but it comes down to how trades take place and how liquidity is provisioned.

Unlike traditional decentralized exchanges, which require sell orders at a certain order to match buy orders, Curve uses a market-making algorithm or algorithms to bolster the liquidity of its markets. This makes Curve an automated market maker (AMM) protocol. 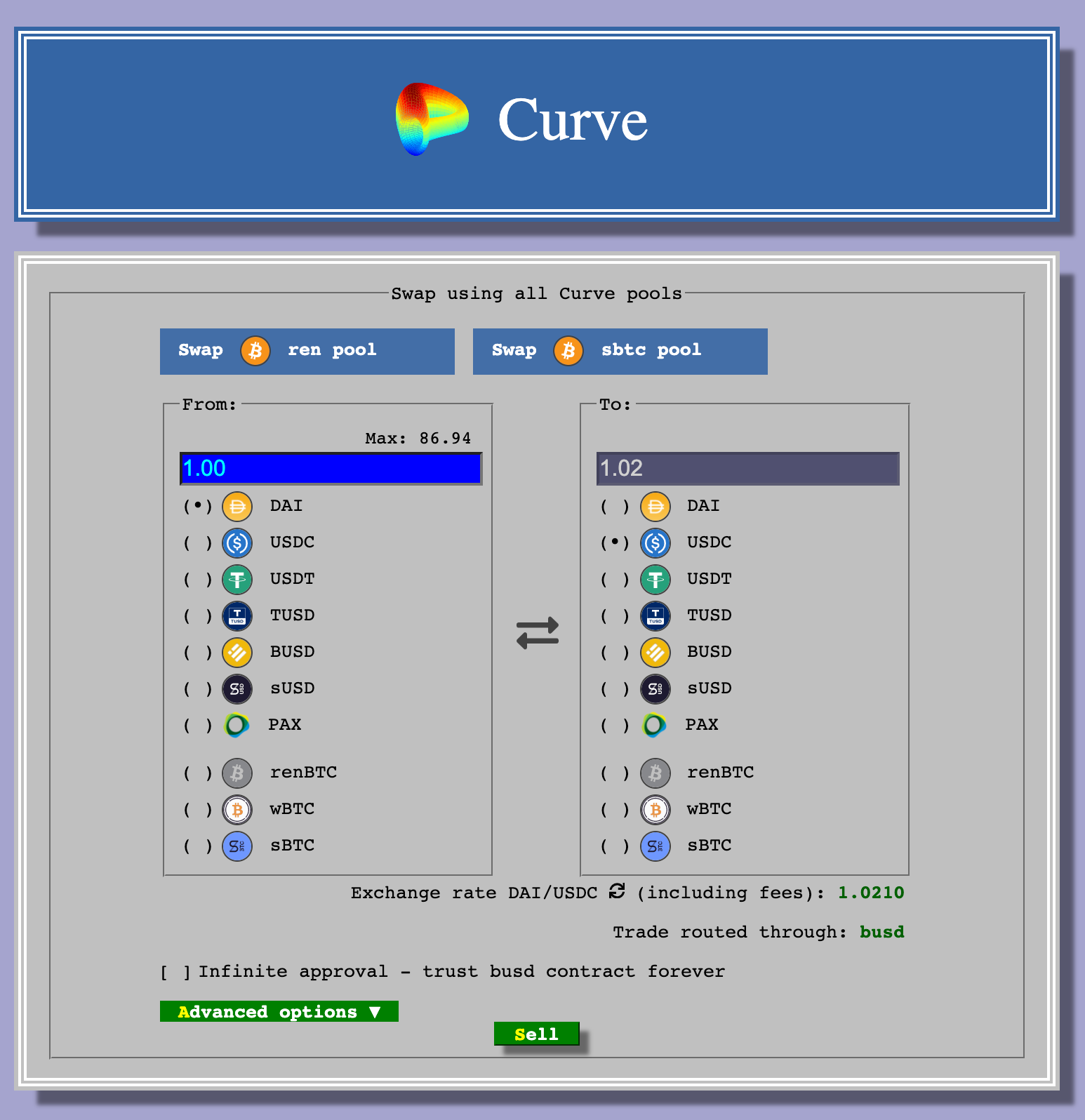 For those unaware, a market maker is either a software or entity that buys and sells financial instruments, providing liquidity to a market while also profiting from the spread between the bid and ask prices.

Thus, by implementing a market maker algorithm, Curve can allow for the faster matching of orders on its platform. Egorov said in the same aforementioned interview that the algorithm it has implemented can make provide Curve markets with “100-1000 times higher market depth than Uniswap or Balancer.”

“The key aspect of Curve is its market-making algorithm, which can provide 100-1000 times higher market depth than Uniswap or Balancer for the same total value locked. This dynamic helps both traders and liquidity providers because fundamental returns for those are higher than on Uniswap and alike by the same factor as the market depth.”

This means that traders, even larger “power users,” can easily swap their cryptocurrency for another (as long as it’s supported by a Curve pool) with minimal fees and slippage.

What’s interesting about Curve and other Ethereum-based DeFi protocols in its class is that anyone can provide liquidity to the market.

Liquidity provisioning is incentivized by potential profits one can make from doing so. These decentralized liquidity pools take fees, which are then relayed to liquidity providers.

Profits one can make by depositing their cryptocurrency into a pool can vary, as it largely depends on the volume and deposits a pool sees on a day-to-day basis.

While these returns may sound appealing, especially in a world with 0% interest rates and devaluing fiat, it is important to note that there are risks in providing cryptocurrency to a pool.

The Risks In Providing Liquidity to Curve, Balancer, And Other AMMs

The main risk in using Curve and other AMM protocols is the risk of suffering from impermanent loss (IL).

Simply put, an impermanent loss is the loss one can incur by depositing cryptocurrency into an automated market maker protocol such as Curve or Balancer rather than holding those assets in a wallet. ILs appear when the prices of a token in a liquidity pool diverge.

These losses can be impermanent (hence the name). But ILs can become permanent when arbitrageurs, who have the role of balancing each pool, rebalance the pool to the price of the pooled assets on exchanges.

DeFi analyst and venture capitalist Andrew Kang shared the chart in July 2020. It shows how putting Chainlink (LINK) into a Uniswap pool strongly underperformed just holding LINK over the year prior to the publishing of the chart.

Again, this is not an issue that only pertains to Curve. Other AMMs like Uniswap and Balancer are susceptible to ILs as well.

Notably, though, the magnitude of potential ILs is naturally lower on Curve than with other AMMs due to the composition of pools: Curve is stablecoin centric while other AMM protocols allow for the trading of almost any Ethereum-based altcoin. As one DeFi commentator wrote on the matter:

“Since Curve only trades stablecoins, however, liquidity providers experience minimal, if any impermanent loss. This makes supplying liquidity on Curve in some respects more attractive than with Uniswap as returns are market-neutral.”

What Is Curve Finance?

With the basics of Curve out of the way, it’s worth taking a look at what exactly CRV is.

As aforementioned, Curve wasn’t fully decentralized at launch. While users could weigh in via Twitter, Reddit, or other forums, the direction of the Ethereum-based protocol was largely dependent on the Curve team.

This changes with CRV, an Ethereum-based cryptocurrency set to be launched in late July, and CurveDAO, a decentralized autonomous organization that will use CRV as its governance token.

This system means that those that have supplied liquidity in the past or are currently supplying liquidity to Curve pools will be allowed to claim CRV.

As of this article’s writing, the maximum supply capitalization of CRV will be 3.03 billion tokens. This supply will be distributed as follows:

Time for a quick announcement.

Curve is working on decentralizing its ownership through a Curve governance token. All liquidity providers since the inception in January 2020 will be considered for the initial distribution proportionally.

Importantly, these details are subject to change. Blockgeeks will update this guide if those details do change.

Curve recently encountered a front-end DNS cache poisoning attack on its Web2 website that caused investors to lose around $600,000. The issue was with their domain that hosted the front-end UI for the protocol. This risk could have been mitigated by using ENS instead of DNS, and it goes to show any protocol dealing with large amounts of money is being constantly stalked by hackers. Any vulnerability will eventually come to the surface, and there is always a risk that a protocol-breaking bug is present that we are not yet aware of.

The Curve Finance platform has already made a huge achievement in developing a feature-full AMM decentralized exchange.

The Curve Finance DAO will facilitate in deciding future pool parameter changes and gauge weights. These gauge weights will determine how much CRV is allotted for each pool.

They’ve recently added cross-chain support for Curve on Fantom. One other team has already announced intentions to work on bringing Curve to Polkadot.

CurveDAO, which is a DAO leveraging the Ethereum-based decentralized organization manager/creator Aragon, will allow CRV holders to influence the direction of the protocol with a “time-weighted voting” system. The time-weighted system gives a more experienced CRV holder more weight in decision making than a holder that is voting a proposal for the first time. This system may make it harder for rich attackers to manipulate the protocol to their advantage.

0
2020-07-22 07:51:38
Have questions? We have built an incredible community of blockchain enthusiasts from every corner of the industry. If you have questions, we have answers! Ask community

What is Aura Finance? The Full Breakdown
0

What is Aave Protocol - Is This The Future of Banking?
0

What Is GMX - The Future of Decentralized Perpetual Exchange?
0

Ethereum Vs Bitcoin: What’s the Difference?
0
Hungry for knowledge?