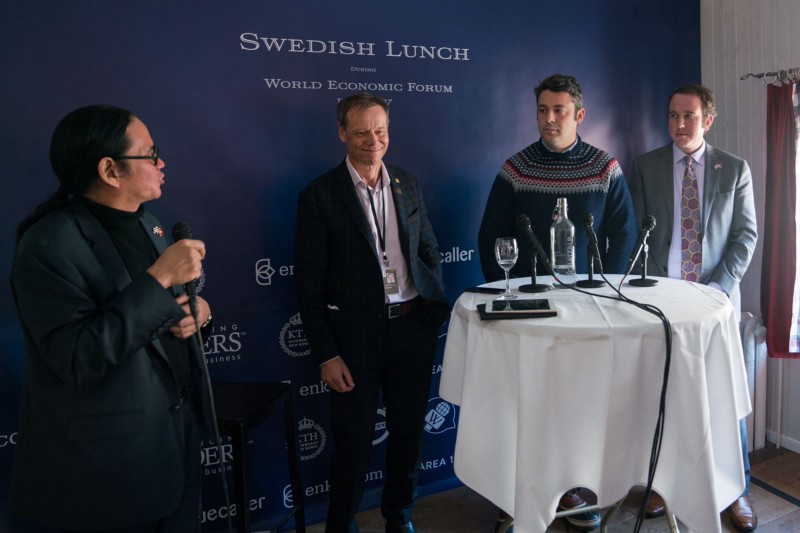 The UN Needs Blockchain to Achieve Its Goals

By samcassatt
Disclaimer: The views and opinions expressed in this article are those of the authors and do not necessarily reflect the official policy or position of Blockgeeks I recently traveled to Davos, Switze
Tweet37
Share9
Share47
WhatsApp

I recently traveled to Davos, Switzerland for the World Economic Forum, and was surprised to find blockchain on the minds of many of the leaders convened there. Even those who were not particularly knowledgeable about blockchain were aware that they should know about it. I participated in three events, including a panel at the Swedish Lunch, where I spoke about reimagining our global identity infrastructure, in front of a well-informed audience.

This was encouraging, not only because it affirmed my belief that our work at ConsenSys is poised to make a large impact, but because these leaders and changemakers were discussing blockchain in the context of solving many of the world’s most urgent humanitarian problems.

The UN Needs Blockchain to Achieve Its Goals

Frequently, conversations around blockchain center on its potential to: create massive efficiencies for the financial services industry (a recent McKinsey report projected up to $110 billion over the next few years), enable businesses to transfer data more securely, and allow for the creation of new markets and financial products. These are valuable undertakings that can also have positive humanitarian implications, but often the missing piece is how directly blockchain and especially the Ethereum platform can impact development, sustainability, and charity.

At WEF I also participated in a roundtable discussion about how technology can help the UN reach its Sustainable Development Goals. Certainly, there are many new technologies (such as innovations in agriculture like aquaponics and vertical farming) with the potential to help us in this direction, but blockchain, in particular, is uniquely positioned to accelerate our impulses toward inclusivity, solving hunger and poverty, and creating sustainable jobs.

As an extension of that conversation, I’d like to lay out how the technology we work with is prepared to help the UN toward several of its ambitious Sustainable Development Goals.

Blockchain-based systems will lower the barrier to entry to the global financial system. According to the UN and the ID2020 project, currently, 2.5 billion people lack identity in a way that allows them access to financial and government services. M-Pesa is an example of a digital platform that enables people without such access to claim a financial identity. It was quickly adopted in Kenya because of the vacuum there for government-provided identity.

Those 2.5 billion people currently are unable to capitalize on their human creativity or desire to produce. Without identity, they are barred from creating contracts, securing loans, or developing credit history. Blockchain-based identity unlocks their potential to participate and add value to the global economy as they bring that identity into contact with decentralized applications (DApps) that behave like financial services, offering vehicles for loans, banking, and investment. uPort provides the cornerstone of blockchain based identity upon which these other services can be layered.

Normally becoming an entrepreneur has required funding for projects, and access to lawyers in order to, for example, create stock purchase agreements. Today with blockchain-enabled applications like WeiFund, becoming an entrepreneur can literally be “just a few clicks away”. The previous generation of entrepreneurs did not necessarily have the access, financial, or legal tools to secure funding or create legally sound contracts. Blockchain-based funding is the logical next step in the trajectory from traditional venture fundraising, to crowdfunding platforms like Kickstarter and Indiegogo, to the world where investors can track how their funds are used and invest any amount of currency, in a trusted fashion, in projects across the world.

The price of smartphones is projected to decrease over time. Tomorrow’s smartphones will cost the same as today’s feature phones, which is the price most of the world’s least economically advantaged pay for mobile today. That means people in developing countries, or people who lack access, can leapfrog desktop computers. In theory, they can raise funds and make strides toward creating products on smartphones alone.

The blockchain is a new technological arena where the winners are yet to be born. This means an opportunity for emerging markets to make strides in their economic development leveraging the technology, without the need for significant overhead investment in infrastructure.

Similarly to how developing economies can leapfrog post-industrial economies regarding blockchain development (since there is no deeply established set of blockchain businesses) women and minorities also have a unique opportunity in blockchain to experience the same barrier to entry as others approaching the field.

In the blockchain space, there is currently no entrenched mentorship hierarchy, and no need to be part of a specific social group or boys’ club in order to access information and libraries that tend to be open source. With its open-source roots, blockchain is inherently a technology of inclusion, and that structure is already being reflected (though it should and can be even more) in terms of the diverse group of people who are already taking the lead. At this point, anyone who enters is getting in early, and has the chance to seize the reins.

For example, Fereshteh Forough at Code to Inspire is teaching Afghan women to code and skills specific to the blockchain. Ola Dudin, a founder of BitOasis, is another powerful example of women leading in our space.

That inclusion is already starting to happen with microfinance. Evidence has demonstrated the power of offering micro-loans and other forms of financial support for burgeoning female entrepreneurs in developing communities. Blockchain-based funding applications will make these types of investments more widely accessible.

Blockchain technology is poised to enable individuals and government groups to fight climate change by allowing them access to better monitoring tools and models for their individual energy consumption and contributions to factors such as air pollution.

Co-Tricity is an example of an energy project based on the Ethereum blockchain that incentivizes communities to invest in clean energy and create value for local communities.

With the infrastructure in place, blockchain-enabled systems allow individual solar panel owners to directly sell extra solar energy to their neighbors, at prices set by the counterparties in the transaction, without relying on the centralized and antiquated energy grid accounting infrastructure. Decentralized energy production and sharing is more secure, since it avoids a centralized single-point-of-failure system, and also creates new opportunities for entrepreneurship in communities, which are then allowed to retain that value within their geographical location. If all you need in order to become an entrepreneur is a solar panel or Tesla wall battery (and, of course, the regulatory framework to allow peer-to-peer energy sharing) the barrier to entry to the economy lowers.

Blockchain enables the creation of new business models for industries that require less prerequisite infrastructure investment and immediately take part in a fourth Industrial Revolution. As mentioned earlier, the potential here is for developing nations and communities to leapfrog industrial and post-industrial economies and immediately plug into the global economy.

A person in a developing country could secure a loan from EtherLoan or funding through WeiFund from halfway around the world based on the strength of his reputation for financial responsibility connected to his blockchain-based identity, and without access to a bank or official legal services create and execute smart contracts on the blockchain. The individual’s investor abroad can feel confident that their resources are going to good use, using transparent blockchain-based governance tools such as Boardroom to directly monitor use of funds.

The blockchain is sometimes positioned as a disruptor to governments, or described in the context of enabling anonymous sales of illegal materials. This comes from the first highly publicized use cases for bitcoin as the basis for transactions on dark websites like the Silk Road. However, smart regulators and government officials (listen to Episode 12 of Laura Shin’s “Unchained” podcast where she speaks with Kathryn Haun, for example) have realized that blockchain, just like all tools, properly governed in the interest of our society, holds the potential for great benefit.

Governments have already discovered several strong use cases for blockchains; paper land titles are one example. When Haiti was hit by the 2010 earthquake, the municipal buildings containing paper records such as land titles were destroyed. This is a prime example of a vulnerable, single-point-of-failure system. Moving paper records to decentralized blockchains, and attaching ownership of assets to people’s blockchain-based identities put governments in a far better position to preserve citizens’ claims to assets, increasing confidence in those governments and economies. Many governments store all their data in centralized databases which leave them open to human errors, accidents, and tampering.

Additionally, government agencies frequently perform redundant functions, such as KYC (know your customer) checks. If those agencies coordinate and create blockchain-based shared source of truth resources, that allows agencies to eliminate redundancies and spend taxpayer funds more efficiently. Those shared data pools allow governments to create higher-quality models enabling them to better serve public interests. If every decision an agency makes is tracked to individual employees’ or groups’ blockchain-based identities, it makes for easy audits and excellent tracking in case of an error to determine how a process went wrong.

Blockchain-based systems for tracking the distribution of agricultural resources contribute to less food waste and loss. Reducing waste in food supply chains could have enormously positive consequences and allow governments, large-scale growers, and individual farmers to ensure that the resources they produce are allocated as efficiently and effectively as possible.

Partnerships for the Goals

Ultimately, nearly every technology that has produced a massive, positive impact on humanity has enabled increasingly large groups of humans to collaborate and work together toward a common goal. With the advent of the Internet, the number of people that could potentially work together today has reached 3.5 billion, the portion of the planet that is currently connected to the Web. That number grows every day. One of the reasons this enormous population is not able to effectively collaborate is the lack of universally shared mechanisms for trust. Trust, after all, is the foundational element, or prerequisite, for people to work together.

Something we often say at ConsenSys is that wherever trust is a problem, blockchain could offer a solution. The blockchain creates a secure and transparent record of business processes and functions that go on in societies that is far less subject to errors and manipulation than previous systems. It is inherently logical and governed by code, removing the need for trust in third parties, like governments and legal systems, which can be corrupted or make mistakes.

If we work together to create the regulatory environment and technological infrastructure (through STEM and specifically blockchain education, and the creation of technology hubs, such as what Dubai is becoming) for shared, accepted blockchain-based systems, we have the power to create the foundation for worldwide trust and unlock deep connectivity and collaboration between parties that might never otherwise be able to come to the table together.

The potential for good here is truly enormous, and in order to actualize that potential, blockchain will need experts, advocates, and partners at every level to help usher in a future that is more inclusive, open, and just.

tips for writing your dissertation https://helpon-doctoral-dissertations.net/